Devoted to the Mystery of the Incarnation 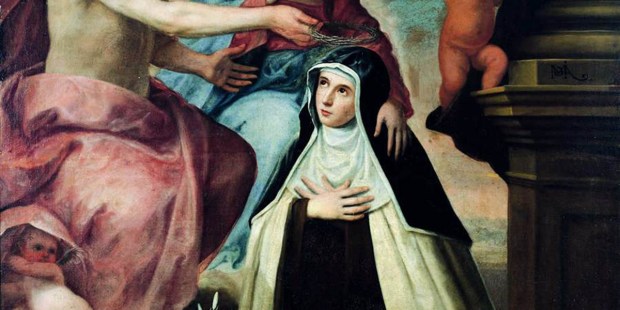 + Catherine d’Pazzi was born in Florence. At the age of 16 she became a nun in the Carmel in Florence, receiving the religious name “Mary Magdalene.”

+ In 1584, she developed a seemingly fatal illness and experienced a number of visions and ecstasies, during which she received the stigmata and was united to the Passion of Christ.

+ Although the visions lasted for more than a year, when that time ended, she was left with a great sense of spiritual dryness and desolation. Her feelings of despair were so strong, she contemplated suicide.

+ Despite her sufferings, she remained faithful to her spiritual director and the prioress of her community. Inspired by the mystery of the Incarnation and the work of the Holy Spirit within the soul, she constantly encouraged her sisters to abandon their self-will and entrust themselves to the will of God.

+ Having served her community as novice mistress and subprioress, she died on May 25, 1607. Saint Mary Magdalene de Pazzi was canonized in 1669 and she is honored as a patron of the sick.

O God, lover of virginity,
who adorned with heavenly gifts
the Virgin Saint Mary Magdalene de’ Pazzi,
setting her on fire with your love,
grant, we pray, that we, who honor her today,
may imitate her example of purity and love.
Through our Lord Jesus Christ, your Son,
who lives and reigns with you in the unity of the Holy Spirit,
one God, for ever and ever. Amen.