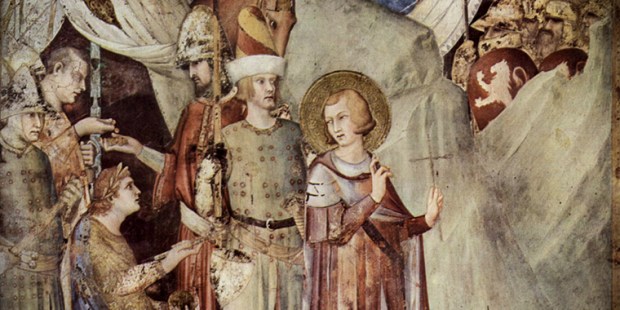 + Martin was born in Hungary and was the son of pagan parents. He became a catechumen and served in the Roman army until, after having given half his cloak to a beggar in Amiens, a vision of Christ inspired him to be baptized and to become a monk.

+ Ordained an exorcist by Saint Hilary of Poitiers, he lived a life of solitude before building a new monastery in Ligugé. Despite his reluctance, Martin was named bishop of Tours in 371.

+ After his episcopal consecration, he continued to lead the life of a monk. He later founded the abbey of Marmoutier and other monasteries as centers of evangelization.

+ Martin’s life was one of prayer and service to his monks and his people. Honored as a miracle worker, his biographer, Saint Suplicius Severus, also presents him as having been a mystic. Although he was criticized by many, including his successor, Saint Brice, he bore all criticism with humility and patience.

+ Saint Martin died on November 8, 397. Devotion to him spread quickly after his death and he became one of the most popular saints in Europe. He is honored as one of the patrons of France and of soldiers.

“Here was a man words cannot describe. Death could not defeat him nor toil dismay him. He was quite without a preference of his own; he neither feared to die nor refused to live. With eyes and hands always raised to heaven he never withdrew his unconquered spirit from prayer.”—Saint Sulpicius Severus writing about the death of Saint Martin of Tours

To learn about the life and ministry of the Benedictine monks of St. Martin’s Abbey (Lacey, WA), visit: https://stmartinsabbey.org/

O God, who are glorified in the Bishop Saint Martin

both by his life and death,

the wonders of your grace in our hearts,

that neither death nor life

may separate us from your love.