Saturday, July 25
Saint of the Day: The Feast of Saint James the Greater

Witness of the Transfiguration 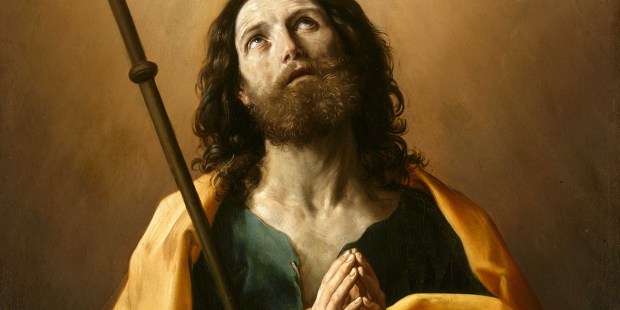 + James, known as “Greater” to distinguish him from the other Apostle of the same name, this James worked as a fishermen with his brother John in the boats of their father Zebedee.

+ Because of their zeal and dedication to Jesus, James and John were given the nickname “Sons of Thunder.”

+ James, along with Peter and John, was privileged to be with Jesus during the Transfiguration and the Agony in the Garden.

+ According to tradition, the relics of Saint James are enshrined at Compostela, Spain, where his shrine remains one of the greatest pilgrim destinations in Europe. He is honored as the patron of Chile, Guatemala, Nicaragua, and Spain.

“Like Saint James, we sometimes ask of the Lord more than we are ready to receive. We must become as little children and accept from the hands of our heavenly Father whatever he deigns to give us.”—Enzo Lodi

To learn about the Missionary Society of St. James the Apostle, visit: https://www.socstjames.com/

July 25, the Feast of Saint James, is also the date on which the Church celebrates the memory of the third century martyr Saint Christopher. Popularly honored as the patron saint of travelers and as one of the “Fourteen Holy Helpers,” many mistakenly believe that Christopher was “de-sainted” in the years following the Second Vatican Council. This is, however, not the case. Although his liturgical commemoration was removed from the Universal Calendar that governs the celebrations of the saints (in large part because of a lack of historical information about Saint Christopher), his name is still included in The Roman Martryology, the Church’s official list of saints.

Almighty ever-living God,
who consecrated the first fruits of your Apostles
by the blood of Saint James,
grant, we pray,
that your Church may be strengthened by his confession of faith
and constantly sustained by his protection.
Through our Lord Jesus Christ, your Son,
who lives and reigns with you in the unity of the Holy Spirit,
one God, for ever and ever. Amen.