Saturday, May 2
Saint of the Day: St. Athanasius

Defender of the Divinity of Jesus 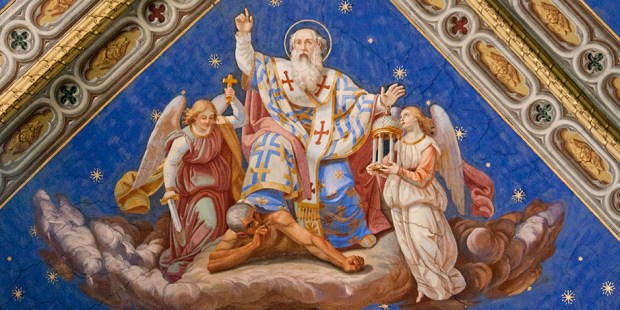 + Athanasius was born in Alexandria, Egypt and, as a young priest, accompanied Saint Alexander, the bishop of Alexandria, to the Council of Nicaea. He eventually succeeded Alexander as bishop of the city.

+ Athanasius was an outspoken opponent of the Arian heresy (which denied the divinity of Jesus) and he suffered greatly for his defense of the Divine Nature of Christ.

+ Athanasius dedicated his life to teaching the faith in his preaching and writings and focused much of his teachings on the Incarnation, which he believed revealed the extent of God’s love for humanity.

+ Saint Athanasius died on the night of May 2-3, 373, after serving as bishop for 46 years. He was declared a Doctor of the Church in 1568 and he is one of the four great saints depicted at the “Altar of the Chair” in St. Peter’s Basilica in Rome.

+ The biography of Saint Anthony the Abbot (who is also known as Saint Anthony of Egypt) is the best-known work by Saint Athanasius. Considered by some scholars to be the most widely read book of the Middle Ages, it inspired countless men and women to dedicate themselves to God as monks and nuns.

“God the Word, by his union with humanity, restored to fallen humanity the image of God in which it was created. By his death and resurrection, he overcame death, the consequence of sin.”—Saint Athanasius

On this day, we also remember the catechist and martyr Saint Giuse (Joseph) Nguyen Van Luu. A layman and farmer, he was arrested when he tried to take the place of a hunted priest during the persecutions of the Emperor Tu-Duc. Saint Giuse died on May 2, 1854, from injuries he suffered during his imprisonment. He was canonized with other martyrs of Vietnam in 1988.

Almighty ever-living God,
who raised up the Bishop Saint Athanasius
as an outstanding champion of your Son's divinity,
mercifully grant,
that, rejoicing in his teaching and his protection,
we may never cease to grow in knowledge and love of you.
Through our Lord Jesus Christ, your Son,
who lives and reigns with you in the unity of the Holy Spirit,
one God, for ever and ever. Amen.