Bishops and martyrs, they are included in the First Eucharistic Prayer 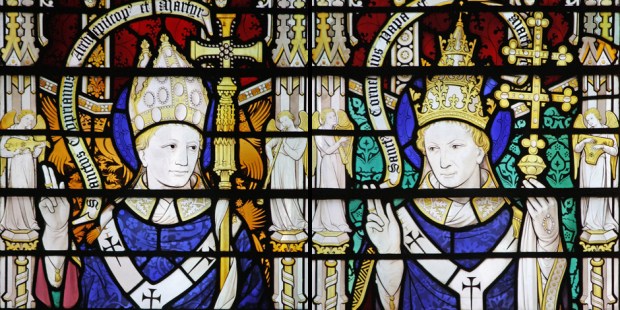 + Cornelius was elected bishop of Rome in 251. As pope, he fought against various heresies and, with the help of the bishop Cyprian, he also worked to enforce the papal authority.

+ Driven into exile by the Emperor Gallus, Cornelius died in 253. His body was later returned to Rome and buried in the Cemetery of St. Callistus.

+ Cyprian was born to pagan parents in Carthage (North Africa) around the year 210.

+ After his conversion to Christianity, Cyprian was ordained and became bishop of Carthage in 249. Through his writings and pastoral care, Cyprian guided his flock through difficult times.

+ Cyprian was martyred during the persecution of the emperor Valerius, in the year 258.

+ These two martyrs have been honored with a common feast for several centuries and their names are included in the Roman Canon (the First Eucharistic Prayer).

+ Pope Saint Cornelius is invoked as a patron of those suffering from earaches, fevers, and those with epilepsy. Saint Cyprian is honored as the patron of Algeria and all of North Africa.

The successor of Pope Saint Cornelius was Pope Lucius I. This pope is also honored as a saint and was, for centuries, mistakenly listed among the martyrs. Around the year 1100 some of his supposed relics were taken to Roskilde (modern-day Denmark) and devotion to him there remained strong through the time of the Protestant Reformation. Pope Saint Lucius is included in the Roman Martyrology on March 5 (although his commemoration was previously celebrated on March 4, which is also the commemoration of Saint Casimir of Lithuania and Poland).

“You cannot have God for your Father if you do not have the Church for your mother…. God is one and Christ is one, and his Church is one; one is the faith, and one is the people cemented together by harmony into the strong unity of a body.”—Saint Cyprian

God our Father, in Saints Cornelius and Cyprian you have given your people an inspiring example of dedication to the pastoral ministry and constant witness to Christ in their suffering. May their prayers and faith give us courage to work for the unity of your Church. Grant this through our Lord Jesus Christ, your Son, who lives and reigns with you and the Holy Spirit, one God, for ever and ever. Amen.