Saturday, September 26
Saint of the Day: Sts Cosmas and Damian

Patron Saints of Physicians and Pharmacists 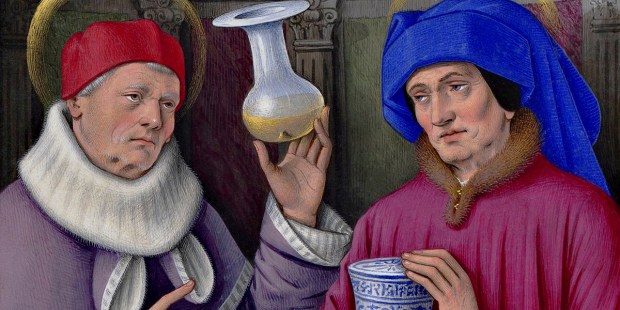 + According to legend, Cosmas and Damian were twin brothers from Syria who worked as physicians, serving the poor at no charge.

+ Although there are various legends about their lives and the way they died, they were probably killed around the year 287.

+ Devotion to these martyrs was widespread and, with Saint Luke the Evangelist and Saint Pantaleon, they are honored as the patron saints of physicians and pharmacists.

“Holy men shed their glorious blood for the Lord; they loved Christ in their life, they imitated him in their death, and therefore were crowned in triumph.”—Entrance Antiphon for the Mass “for Several Martyrs”

September 26 is also the day the Church remembers Blessed Amparo Rosat Balsach and Blessed María del Calvario Romero Clariana. These Sisters of Christian Doctrine were in Carlet, Valencia, Spain, on September 26, 1936, during the anti-Catholic violence of the Spanish Civil War. They were beatified with other martyred members of their community in 1995.

May you be magnified, O Lord,
by the revered memory of your Saints Cosmas and Damian,
for with providence beyond words
you have conferred on them everlasting glory,
and on us, your unfailing help.
Through our Lord Jesus Christ, your Son,
who lives and reigns with you in the unity of the Holy Spirit,
one God, for ever and ever. Amen.