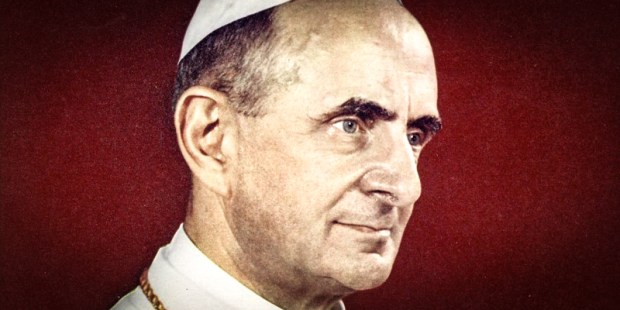 + Born in Concesio in the Lombardy region of Italy, Giovanni Battista Montani was ordained priest in 1920.

+ After serving as a protosecretary for Pope Pius XII, he was appointed archbishop of Milan in 1954. Named a cardinal in 1958, he was elected Pope on June 21, 1963, taking the name Paul VI.

+ Continuing the reforms of Pope Saint John XIII, Pope Paul reconvened the Second Vatican Council and supervised the implementation of many of its decrees.

+ Pope Paul VI is especially remembered for his much-debated encyclical Humane Vitae and his for his commitment to peace and justice.

+ Blessed Pope Paul VI died on August 6, 1978. He was beatified by Pope Francis at the conclusion of the Extraordinary Synod on the Family in 2014.

August 6 is the Feast of the Transfiguration of the Lord during which Peter, James, and John were given a glimpse of the divinity of Jesus on Mount Tabor.

“We believe in the communion of all the faithful of Christ, those who are pilgrims on earth, the dead who are attaining their purification, and the blessed in heaven, all together forming one Church; and we believe that in this communion the merciful love of God and His saints is ever listening to our prayers.”—Blessed Pope Paul VI

Almighty ever-living God, who chose blessed Paul VI to preside over your whole people and benefit them by word and example, keep safe, we pray, by his intercession, the shepherds of your Church along with the flocks entrusted to their care, and direct them in the way of eternal salvation. Through our Lord Jesus Christ, your Son, who lives and reigns with you in the unity of the Holy Spirit, one God, for ever and ever. Amen.

(from The Roman Missal: Common of Pastors—For a Pope)