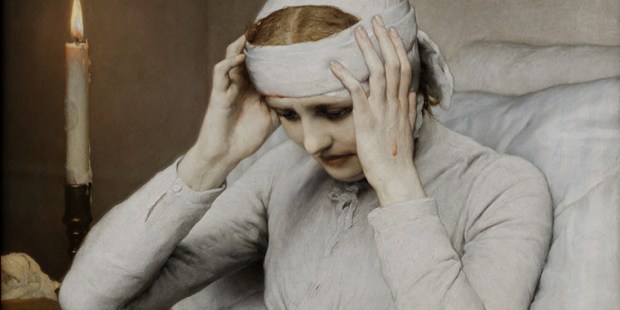 + Anne Catherine was born in 1774 to a family of poor farmers in a small community near Münster, Germany.

+ A pious child, she received little formal education and when she was twelve years old, she started work at a local farm before receiving training as a seamstress. Feeling called to religious life, she applied to several local convents but was refused because she could not afford the customary dowry.

+ The Poor Clares in Münster accepted her on the condition that she play organ for the community. She was unable to fulfill this condition, however, because she sacrificed her small savings—intended to pay for lessons—to help provide for a poor family.

+ In 1802, Anne Catherine was finally accepted as a member of the Augustinian convent in Agnetenberg; she pronounced religious vows the following year.

+ Known for her strict adherence of the community’s rules, she began to experience serious illness and great pain beginning in 1811. Sadly, the community was suppressed by order of King Jérôme Bonaparte in 1812 and Anne Catherine took refuge in the home of a local widow.

+ In early 1813, the marks of the stigmata were reported on Anne Catherine’s body. After being examined by physicians and by church authorities, no evidence of fraud was found and she began to experience of a series of visions and mystical experiences. Her visions focused on New Testament events and events of the lives of Mary and Jesus not recorded in Scripture. These visions were eventually compiled and published. While the Holy See has not endorsed these visions, the writings have been described as “an outstanding proclamation of the gospel in the service to salvation.”

+ Blessed Anne Catherine Emmerich died on February 9, 1824. She was beatified in 2004 on the virtues of her life of faithful suffering and fidelity to her vocation, rather than on the merits of her mystical experiences.

“Her material poverty is contrasted with her rich interior life. As much as by her patience to endure her physical weaknesses, we are impressed by the strength of character of the new blessed and her firmness in the faith. She received this strength from the Holy Eucharist. In this way, her example opened the hearts of poor and rich men, educated and humble people, to complete loving passion toward Jesus Christ.”—Pope Saint John Paul II at the beatification of Anne Catherine Emmerich

O God, who called your handmaid blessed Anne Catherine to seek you before all else, grant that, serving you, through her example and intercession, with a pure and humble heart, we may come at last to your eternal glory. Through our Lord Jesus Christ, your Son, who lives and reigns with you in the unity of the Holy Spirit, one God, for ever and ever. Amen.

(from The Roman Missal: Common of Holy Men and Women—For a Religious)