Sunday, March 8
Saint of the Day: St. John of God

Patron of those with heart disease 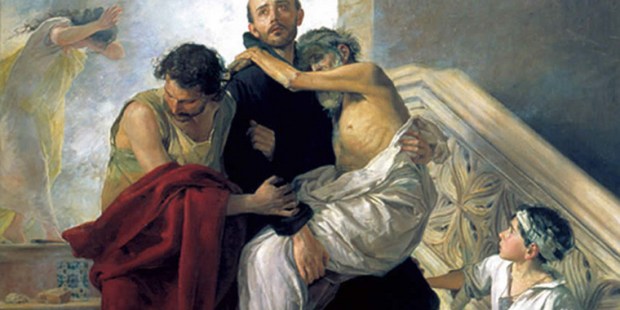 + John was born in 1495 and spent his early years working as a shepherd.

+ In 1522, he enlisted as a soldier, losing the piety of his youth during his years of service. After he was released from the military he resolved to change his life and began to devote himself to God’s service.

+ John eventually settled in Granada and his conversion was enriched by the preaching of Saint John of Avila.

+ In 1540, John, who came to be known as Juan de Dios by the poor whom he loved so much, rented a house in which he might care for the sick. This mission laid the foundations for a new community: the Order of Hospitaller Brothers.

+ After ten years of labor, John graciously accepted failing health, offering an inspiring witness to all who knew him.

+ Saint John of God died on March 8, 1550, as he knelt in prayer before the altar. Canonized in 1690, he is honored as the patron saint of the sick and of those with heart disease.

“If we look forward to receiving God’s mercy, we can never fail to do good so long as we have the strength.”—Saint John of God

Today the Church also remembers Saint Jón Helgi Ögmundarson. Honored as the Apostle of Iceland, he was the first bishop of Holar. Saint Jon died in 1121 and was canonized in 1201.

To learn more about the life and ministries of the Hospitaller Brothers of St. John of God, visit: https://www.sjog-na.org/

O God, who filled Saint John of God
with a spirit of compassion,
grant, we pray,
that, giving ourselves to works of charity,
we may merit to be found among the elect in your Kingdom.
Through our Lord Jesus Christ, your Son,
who lives and reigns with you in the unity of the Holy Spirit,
one God, for ever and ever. Amen.