Sunday, October 4
Saint of the Day: St. Francis of Assisi

“The Man of Poverty” 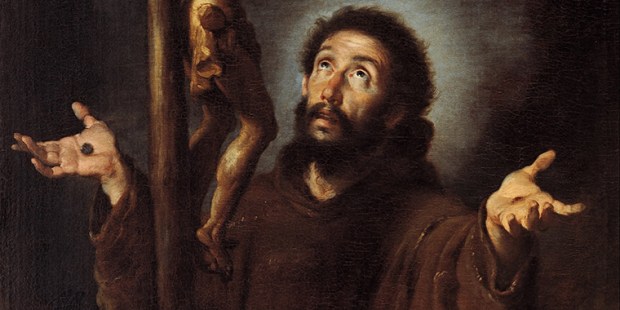 + Francis Bernardone was born in Assisi, Italy. The son of a prosperous cloth merchant, Francis discovered his unique vocation following a year of imprisonment (after a failed military campaign) and a long period of illness.

+ Inspired by Christ’s instruction that his followers should sell all and make disciples of all nations, and in response to a mystical experience while praying in the chapel of San Damiano, Francis abandoned the luxury of his youth and adopted a life of radical poverty and penance.

+ Disinherited by his father, Francis chose to wed “Lady Poverty” and began to work as an itinerant preacher, caring for the poor and lepers. He soon attracted many followers and his band of “lesser brothers” (formally known as “Friars Minor”) traveled throughout Italy preaching the gospel in simplicity and charity.

+ The Rule of the Friars was approved in 1210 and, in 1212, Francis established a second Order with Saint Clare: the “Poor Ladies of San Damiano.” By 1219 the time of the Franciscans’ first General Chapter, there were more than five thousand friars.

+ Francis dedicated his life to prayer, simplicity, and to being poor with the poor and died on October 3, 1226. He was canonized in 1228 and is honored as one of the most beloved saints in the Church’s history.

+ In 1224, as Francis was praying at a hermitage on Monte La Verna, he received the gift of the stigmata. Each year, Franciscan friars and sisters, as well as the Poor Clares, celebrate the Feast of the Stigmata of St. Francis on September 17.

On this day we also remember Saint Damaris of Athens. According to ancient tradition, she was converted by Saint Paul the Apostle during his time in Athens (see Acts 17). No other details of her life have come down to us.

O God, by whose gift Saint Francis
was conformed to Christ in poverty and humility,
grant that, by walking in Francis’ footsteps,
we may follow your Son,
and, through joyful charity,
come to be united with you.
Through our Lord Jesus Christ, your Son,
who lives and reigns with you in the unity of the Holy Spirit,
one God, for ever and ever. Amen.