Thursday, June 18
Saint of the Day: St. Elisabeth of Schönau 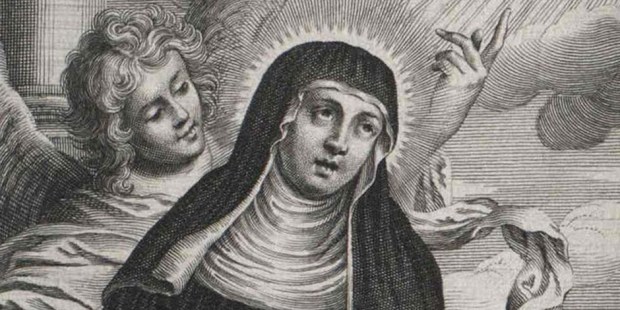 + Elisabeth was born into an obscure German family and we know nothing of her childhood. Educated at the monastery of Schönau, she joined the community and professed religious vows as a Benedictine nun in 1147.

+ Although she was honored for her piety and devotion to the Rule of St. Benedict, it seems that Elisabeth also suffered from a number of bodily and mental ailments. The years between 1147 and 1152 were a particularly challenging time for her, as she suffered from severe anxiety and depression.

+ In 1152, Elisabeth began to experience ecstatic visions, particularly on Sundays and feast days or when reading the lives of the saints. She had apparitions of Christ, the Blessed Mother, angels and saints who would instruct her in divine teachings. She also recorded visions of the passion, death, and resurrection of Jesus, as well as other scenes from the Old and New Testaments. These were later recorded in three books of “Visions.”

+ In 1157, she was elected abbess of the community and she became an advisor to many powerful secular and church leaders.

+ An honored magistra and spiritual teacher for her religious sisters, Elizabeth died in 1164 or 1165. Although never formally beatified or canonized, she is honored with the title “Saint” in the Roman Martyrology.

“Do not delay in serving your God. Walk in the way of His contemplation, like beloved daughters, with every humility and love and obedience, without murmuring, without detraction, without envy and similar things, but like young lambs pleasing to the living God.”—from a letter of Saint Elizabeth of Schönau to the nuns at Andernach

O God, who called your handmaid blessed Elizabeth to seek you before all else, grant that, serving you, through her example and intercession, with a pure and humble heart, we may come at last to your eternal glory. Through our Lord Jesus Christ, your Son, who lives and reigns with you in the unity of the Holy Spirit, one God, for ever and ever. Amen.

(from The Roman Missal: Common of Holy Men and Women—For a Nun)