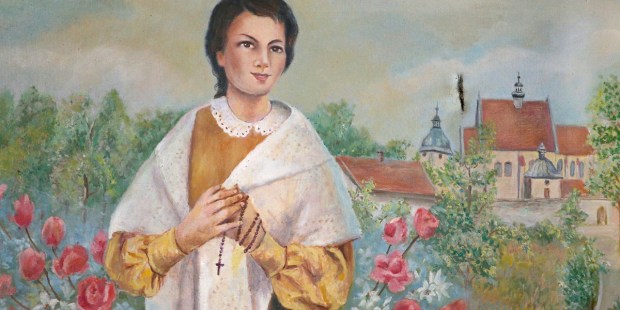 + Angela (or Aniela) was the youngest of ten children born to a tradesman in Siepraw, Poland.

+ At the age of sixteen, she experienced a mystical encounter that led her to devote her life to God, turning her back on many of the normal pursuits and interests of other young women of her time.

+ With only two years of formal education, she entered domestic service at the age of twelve. On April 27, 1900—the Feast of Saint Zita—she joined the St. Zita Association, a religious group for women working as maids. The group became a second family for Angela, who dedicated her free time to religious activities.

+ Although she felt called to religious life, and had frequent contact with the Franciscans, she was unable to enter religious life because of poor health. Instead, while continuing to work as a maid, she became a member of the Franciscan Third Order in 1912.

+ In her prayer, Angela found great comfort in the writings of Saint Teresa of Avila and Saint John of the Cross and in her devotion to Saint Francis of Assisi. She had a particular devotion to the Blessed Sacrament.

+ Angela worked as a nurse during the First World War and would use her own money to help provide decent food for the injured soldiers.

+ Her health failed in 1917 and Angela spent the remaining years of her life in prayer and contemplation, supported by her beloved St. Zita Association.

“Aniela Salawa can serve as an example of a strong faith, a perfect conformity with God’s will and an [exceptional] piety.”—Pope Saint John Paul II at the beatification of Blessed Angela Salawa

Give us, O Father,

the spirit of humility and love

that enabled Blessed Angela, the virgin,

to offer herself as a living sacrifice, holy and pleasing to you.

to conform ourselves to Christ your Son.

Who lives and reigns with you in the unity of the Holy Spirit,

(from The Franciscan Proper of Saints)