Thursday, October 15
Saint of the Day: St. Teresa of Avila

Carmelite Reformer and Doctor of the Church 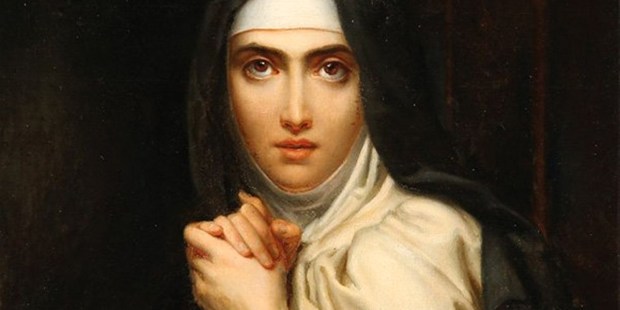 + Teresa was born in Avila, Spain. A charming and happy child, she was sent to be educated by the Augustinians when she was 14. She entered the Carmel (a Carmelite convent) of the Incarnation at the age of 19.

+ Shortly after she professed her religious vows, she became seriously ill and was sent away for treatment. After years of illness, she was inspired to recommit herself to life as a religious after reading the Confessions of Saint Augustine and being especially moved by an image of the suffering Jesus. She was forty years old, at the time.

+ From this renewed conviction, she began to work for the reform of the Carmelite Order and, assisted by the Franciscan Saint Peter of Alcántara and the Carmelite Saint John of the Cross, she established new communities of Discalced (“Barefoot”) Carmelites for both men and women.

+ A gifted mystic, Teresa recorded her experiences and teachings in three major works: The Life, The Way of Perfection, and The Interior Castle.

+ After establishing more than 40 new foundations, she died in 1582. Canonized in 1622, she is honored as one of the most important spiritual writers in the Western Church and was declared a Doctor of the Church in 1970.

“The one who possesses God, lacks nothing; God alone suffices.”—Saint Teresa of Avila

To learn more about the Order of Discalced Carmelites, click visit: http://www.discalcedcarmel.com/

O God, who through your Spirit
raised up Saint Teresa of Jesus
to show the Church the way to seek perfection,
grant that we may always be nourished
by the food of her heavenly teaching
and fired with longing for true holiness.
Through our Lord Jesus Christ, your Son,
who lives and reigns with you in the unity of the Holy Spirit,
one God, for ever and ever. Amen.