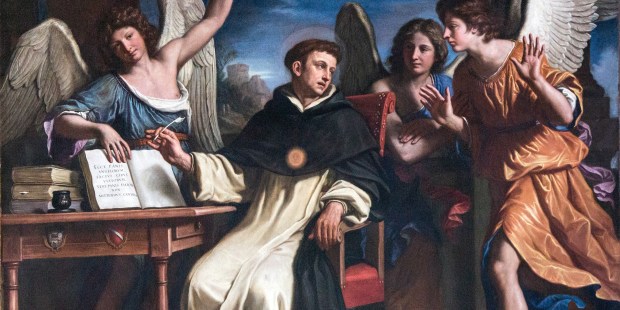 + Thomas was in the Aquino region of Italy. Educated by the Benedictine monks at the great abbey of Monte Cassino, he also studied at the University of Naples.

+ Despite severe opposition from his family, he entered the Order of Preachers (the Dominicans) in 1244. He was sent to study in Cologne, Germany, where he was a student of Saint Albert the Great. Ordained a priest in 1250, he was sent to teach at the University of Paris.

+ Thomas Aquinas is especially remembered for his commentaries on the writings of Aristotle and the Sentences of Peter Lombard, giving rise to the Scholastic movement of theology.

+ His greatest work—and one which continues to define much of Roman Catholic theology—is the Summa Theologica. This systematic exploration of theology combined Greek wisdom with the tenets of Sacred Scripture and the writings of the Fathers of the Church, as well as the movements of medieval theology.

+ Saint Thomas Aquinas died on March 7, 1274, as he traveled to the Second Council of Lyons. He was canonized in 1323 and declared a Doctor of the Church in 1567. He is honored as the patron of Catholic schools, theologians, and philosophers.

“With all my heart I seek you;

let me not stray from your commands.

Within my heart I treasure your promise,

On this day, we also remember Saints Lin Zhao Agatha, Lu Tingmei Jerome, and Wang Bing Lawrence, lay catechists who were martyred in 1858 in Maokou, Langdai Co., China. They were canonized 2000 with other Martyrs of China.

O God, who made Saint Thomas Aquinas
outstanding in his zeal for holiness
and his study of sacred doctrine,
grant us, we pray,
that we may understand what he taught
and imitate what he accomplished.
Through our Lord Jesus Christ, your Son,
who lives and reigns with you in the unity of the Holy Spirit,
one God, for ever and ever. Amen.