Religious Sister dedicated to the educating the poor 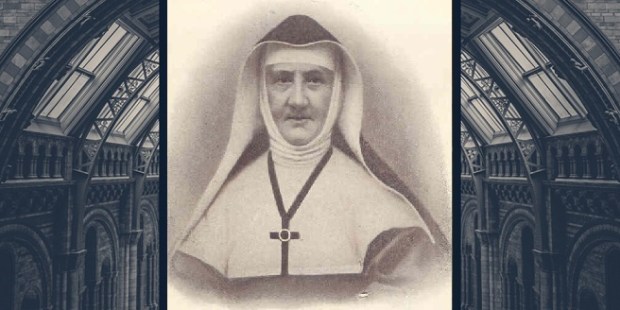 + Jeanne Haze was born in Liege, Belgium, and her father served as an aid for the local bishop. After the French invaded Belgium, her family relocated to Germany.

+ As a child, Jeanne cultivated a deep love for the Passion of Christ, and this eventually grew into a deep sense of compassion for the suffering of others. After their mother’s death in 1820, Jeanne and one of her sisters wanted to enter a religious community, but the anti-Catholic laws of the day prevented them from doing so. And so, the sisters decided to follow a form of religious life in their own home and they opened a small school to support themselves.

+ In 1829, the Haze sisters were asked to take on the task of educating poor girls and they opened a free school in the home of a local priest. In time, the local bishop allowed Jeanne and those women working with her to form a new religious community.

+ The sisters’ rule of life was based on the that of the Jesuits and Jeanne took religious vows on September 8, 1833, taking the religious name “Marie-Thérèse of the Sacred Heart.”

+ Blessed Marie-Thérèse acted as superior of the Daughters of the Holy Cross of Liege until her death on January 7, 1876. She was beatified in 1991.

“Whoever obeys and teaches the commandments of the Lord will be called great in the Kingdom of Heaven, says the Lord.”—Matthew 5:9

On this day, the Church also remembers Saint Giuse (Joseph) Tuan. A married layman and father, he was murdered during the persecutions of Christians under Tu Duc, after refusing to trample on a cross to prove that he was not a Christian. He was martyred on January 7, 1862, and is honored among the Martyrs of Vietnam.

O God, who raised up blessed Marie-Thérèse in your Church to show others the way of salvation, grant us, by her example, so to follow Christ the master, that we may come with our neighbor into your presence. Through our Lord Jesus Christ, your Son, who lives and reigns with you in the unity of the Holy Spirit, one God, for ever and ever. Amen.

(from The Roman Missal: Common of Holy Men and Women—For an Educator)