Tuesday, May 12
Saint of the Day: St. Pancras 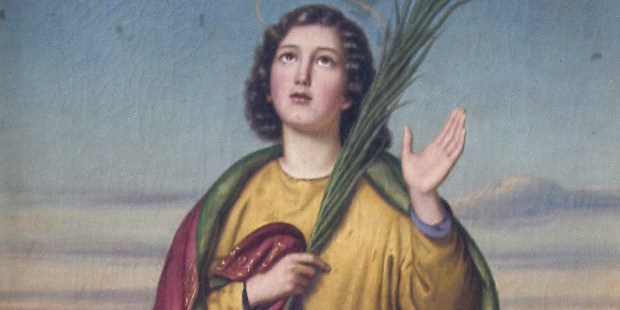 + According to ancient traditions, Pancras (or Pancratius) was an orphan who was brought to Rome by his uncle, Saint Dionysius.

+ After converting to Christianity, Pancras—who was then only 14-years-old—was martyred with Saints Nereus and Achilleus (who are also honored on this day) for publicly professing their faith in Christ.

+ Devotion to Saint Pancras was quite popular in the Middle Ages, especially in England where Saint Augustine of Canterbury dedicated to first church in England to the young martyr.

+ Saint Panras is honored as a miracle worker and as one of the patron saints of children.

+ Saint Dionysius, the guardian and uncle of Saint Pancras, died from abuse and neglect in prison sometime after the martyrdom of Pancras. He is also honored as a martyr and his memory is kept on this day out of respect for his relationship with his nephew.

At that time Jesus exclaimed,
"I give praise to you, Father, Lord of heaven and earth,
for although you have hidden these things
from the wise and the learned
you have revealed them to little ones.”—Matthew 11:25-26

May your Church rejoice, O God,
confident in the intercession of the Martyr Saint Pancras,
and by his glorious prayers
may she persevere in devotion to you
and stand ever firm.
Through our Lord Jesus Christ, your Son,
who lives and reigns with you in the unity of the Holy Spirit,
one God, for ever and ever. Amen.