Patron Saint of Diseases of the Breast 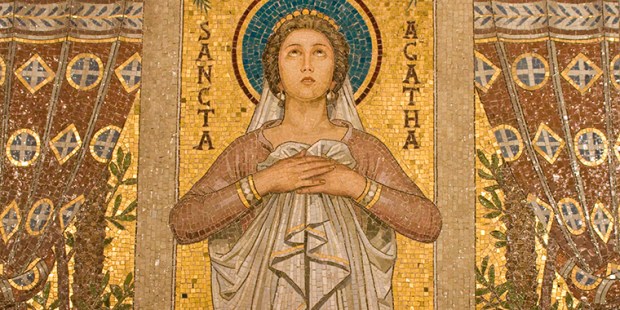 + Agatha died around the year 251 and is one of the most revered and frequently invoked early martyrs. Her name is included in many early lists of saints and she is included in the Roman Canon (the First Eucharistic Prayer).

+ According to tradition, Agatha was born into wealthy family in Sicily and made a vow of virginity at a young age.

+ When a Roman consul tried to marry her, she refused him. Because of this, he denounced her and she suffered horrible tortures, including having her breasts cut off. she died in prison as a result of her tortures.

+ Saint Agatha is invoked against breast cancer and other diseases of the breast. She is also a special patron during times of earthquake and volcanic eruptions, because of a tradition that her intercession saved the people during an eruption of Mount Etna the year after her death.

“Agatha, the name of our saint, means “good.” She was truly good, for she lived as a child of God. She was also given as the gift of God, the source of all goodness to her bridegroom, Christ, and to us. For she grants us a share in her goodness.”—Saint Methodius of Sicily

On this day, we also remember Saint Jesús Méndez-Montoya. A priest of the diocese of Morelia, Mexico, he continued his ministry among the poor people of his diocese during the anti-Catholic persecutions of the Mexican Revolution; he was remembered for his musical abilities. Saint Jésus was killed by revolutionary soldiers in 1928 and was canonized with other martyrs of the Mexican Revolution in 2000.

May the Virgin Martyr Saint Agatha
implore your compassion for us, O Lord, we pray,
for she found favor with you
by the courage of her martyrdom
and the merit of her chastity.
Through our Lord Jesus Christ, your Son,
who lives and reigns with you in the unity of the Holy Spirit,
one God, for ever and ever. Amen.