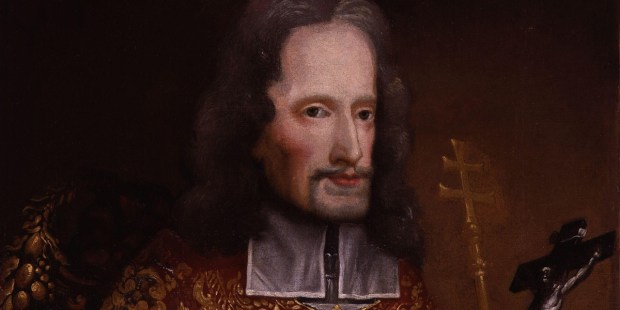 + Oliver was born into a noble, landed family in Loughcrew, County Meath, Ireland.

+ After receiving an excellent education, he traveled to Rome to begin studies for the priesthood. Ordained a priest in 1654, he was appointed to serve as the representative of Ireland’s bishops in Rome.

+ At the time, Catholic Ireland was engaged in a bitter struggle with Protestant England and the oppressive regime of Oliver Cromwell. These tensions prevented Oliver from returning home for several years, during which time he worked as a professor of theology at the College of the Propaganda Fide.

+ In 1669, Oliver was appointed archbishop of Armagh and he returned to Ireland in March 1670.

+ As archbishop, he worked to reform the clergy and, taking advantage of a period of limited toleration of Catholics in Ireland, he opened a Jesuit College in Drogheda.

+ With the passage of the “Test Act” in 1674, Irish Catholics lost their freedoms and the college at Drogheda was closed and demolished. Oliver was forced, traveling in disguise and refusing to submit to being exiled from Ireland.

+ In 1678, an English clergyman named Titus Oates accused Catholics of conspiring to kill the king and, despite the absolute falsehood of these claims, Oliver was also implicated and accused of helping plan a French invasion.

+ Despite the danger he was in, Oliver refused to leave his people. Following his arrest, the prosecutors believed he would never be condemned in an Irish court and, despite his obvious innocence, he was transported to England where he was ultimately executed on July 1, 1681. He became the last Catholic martyr to die in England.

+ Saint Oliver Plunkett was canonized in 1975 and was the first Irish person to be declared a saint in nearly 700 years. In the 1990s, he was named a special patron of reconciliation between Catholics and Protestants in Ireland.

“I have however two consolations, one is interior, namely that I suffer for a good cause, and this will have its result, so I hope in the Divine Mercy, an eternal reward. The second consolation is in my books, which enable me to say that I am never less alone than when alone, never less solitary than when solitary.”—Saint Oliver Plunkett

On July 1, the Catholic Church in the United States celebrates the memory of Saint Junipero Serra, the Franciscan priest and missionary who established nine missions in what is now California. Saint Junipero, whose personal motto was ¡Siempre Adelante! (“Always Forward!) was canonized in 2015.

God our Father, you filled St. Oliver with your Spirit of fortitude, enabling him to feed your flock with his word and lay down his life for his sheep. Help us by his prayers to keep the faith he taught, and to follow the way of reconciliation, which he showed by his example. Grant this through Christ, our Lord. Amen.

(Proper Collect for the Feast of Saint Oliver Plunkett, approved for the dioceses of Ireland)