Wednesday, May 13
Saint of the Day: The Blessed Virgin Mary ~ Our Lady of Fatima

Honored as “Our Lady of the Rosary” 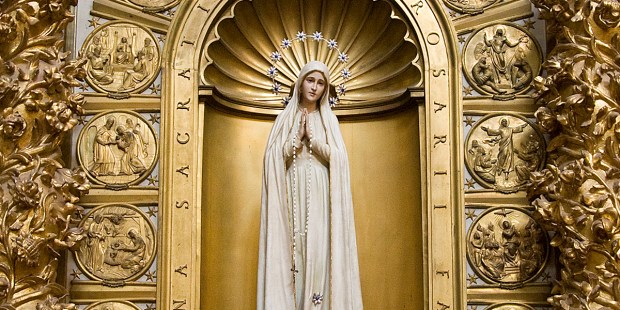 The story of the apparitions

+ On May 13, 1917, the Blessed Virgin appeared to three children near the village of Fatima, Portugal.

+ In the six apparitions that took place between May and October, Mary called herself “Our Lady of the Rosary” and urged Christians to practice penance, to pray the rosary daily, and to have devotion to her Immaculate Heart for the conversion of sinners.

+ The apparitions at Fatima were officially approved by the Bishop of Leira-Fatima in 1930.

+ On May 13, 2017, Pope Francis canonized two of the visionaries: Saint Jacinta and Saint Francisco Marto. The cause for the beatification of the third visionary, Sister Lucia Santos, is being actively promoted.

“With Mary’s protection, may we be for our world sentinels of the dawn, contemplating the true face of Jesus the Saviour, resplendent at Easter.  Thus may we rediscover the young and beautiful face of the Church, which shines forth when she is missionary, welcoming, free, faithful, poor in means and rich in love.”—Pope Francis

O God, who chose the Mother of your Son to be our Mother also,
grant us that, persevering in penance and prayer
for the salvation of the world,
we may further more effectively each day the reign of Christ.
Who lives and reigns with you in the unity of the Holy Spirit,
one God, for ever and ever. Amen.