Round One of Pope Madness! 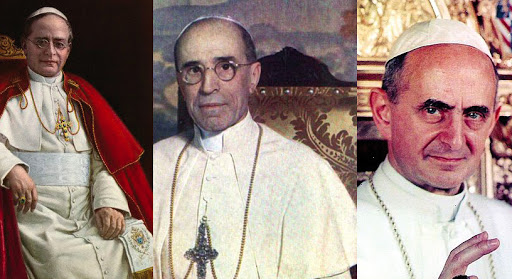 In this round: the only Pope to sell the office, one who’s dead body was put on trail, and another that never existed

Woo-hoo.  Here we are, with the first round of POPE MADNESS! under our belts.  Let’s take a look at some of the highlights, yes?
MATHEW DIVISION HIGHLIGHTS:
STEPHEN VI VS. FORMOSUS
The match up between Stephen VI and Formosus was what they call a “slobberknocker”.  Pope Formosus, who was Pope from 891-896, had a troubled Papacy from the get-go.  His successor, Stephen VI, in a largely political move, had Formosus’ body exhumed, dressed, and put on trial to answer for the transgressions of his papacy.  A deacon was assigned to speak on behalf of the deceased pontiff, who was ultimately found guilty of perjury, illegal acquisition of the papacy, and various violations of canon law. All his ordinations were declared invalid, his papal garments stripped from his corpse, the first three fingers of his right hand chopped off, and his remains flung into the Tiber.
BENEDICT IX VS. JOAN
Benedict IX, the youngest Pope in history.  The only Pope to ever sell the office of the Papacy, and to attempt to regain it through use of force. Benedict IX, a Pope so corrupt that an actual saint described him as “feasting on immorality” and his enemies painted him in my more lurid descriptions. And yet, it is this man, this immoral, truly awful man who makes it through to the next round why? Because “Pope Joan” is a fiction.
No matter how great a story it would make, there was never a female Pope.  No serious historian gives her story any credit, and there was absolutely no mention of her before 13th century, despite her having “ruled” 200 years before.
In light of this fiction, the Rules Committee has declared Benedict IX the de facto winner of this match up.
MARK DIVISION HIGHLIGHTS:
GREGORY VII VS. URBAN VIII
Pope Gregory VII and Urban VIII proved to be an intense fight to the finish.  On the one hand, there was Greg, who was instrumental in establishing our current College of Cardinals and got busy excommunicating a Holy Roman Emperor (twice!).

On the other hand, we have a Pope who stood up to the blabbermouthing of the darling of modern Know Nothings, Galileo, and was the forefather of current anti-smoking laws by declaring the consumption of tobacco on holy spaces illegal.
Ultimately, though, Urban’s nepotism and self-serving military excursions cost him the win in this match up, and Gregory VII squeaked through to the next round.
LUKE DIVISION HIGHLIGHTS:
URBAN VI VS.  STEPHEN I
The odds were stacked against him from the beginning.  Urban VI was the Pope no one wanted.  He wasn’t French enough for the Avignon contingency, and he wasn’t Roman enough for the mob that surrounded the conclave.  Instead, he was from Naples, chastised the Curia for its corruption, and was marked for death.
This, up against Stephen I, who ruled from 254 to 257.  In that short time, he solidified the teaching that those who lapsed from the faith could receive Confession and then Communion without being re-baptized first, a position bitterly contested by his rivals.  However, as any number of us miserable sinners are grateful for, this position won out, and so we don’t have to hit up Father Joe every Friday for a trip to the baptismal font before receiving Reconciliation.
JOHN DIVISION HIGHLIGHTS:
GELASIUS VS. JULIUS II
This match up pits a prolific writer and defender of the faith with a “warrior Pope” known for a strong support of the arts.
Gelasius was Pope from 492-496.  In that time, he clearly stood for the primacy of the Bishop of Rome over the entire Church, and managed to suppress the pagan rite of Lupercalia, a popular festival in ancient Rome.
Julius II was Pope from 1503 to 1513.  In that time, he laid the cornerstone to St. Peter’s, commissioned Michelangelo to paint the Sistine Chapel, and founded the Swiss Guard.  Though he sired at least one child and was known for being extremely warlike, it’s Julius who passes through to the next round.
Who do you think should move ahead?  Leave your suggestions and predictions in the comments for the next match up.