A Pope from the Ends of the Earth 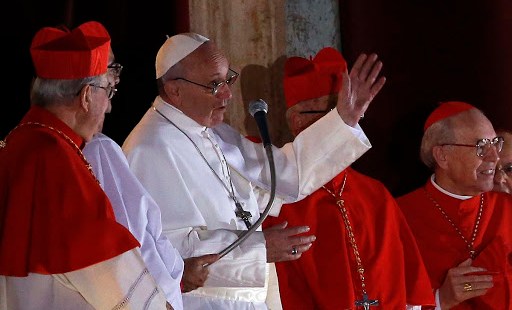 Cardinal Bergoglio had been described as a “Jesuit with a Franciscan heart.”

When Karol Wojtyla stepped on to the world stage as Pope John Paul II he declared to the Roman crowd that he was a “pope from a far country.” His words were echoed today as Jorge Mario Bergoglio said that the cardinals had looked for a pope from the “ends of the earth.”
Pope Francis was also echoing the words of the New Testament. At the beginning of the Acts of the Apostles Jesus Christ prophesies to his apostles at his ascension, “But you will receive power when the Holy Spirit comes on you; and you will be my witnesses in Jerusalem, and in all Judea and Samaria, and to the ends of the earth."
He comes as a witness from the ends of the earth to remind us that the great commission is nearing its completion. The gospel of Jesus Christ really has spread to every corner of the globe. He also comes as the herald of the good news as the first pope to be a “reverse missionary.” The Jesuit missionaries took the gospel to the new world, now a Jesuit missionary returns to evangelize the old world.
The quotation from the Act of the Apostles reminds us that the command to preach the gospel is also the primary mission of the pope, bishops and clergy of the church. The Pope is called to not only step into the shoes of Peter, but to step out of those shoes and step out of the boat to walk on the waves and follow Christ to become a fisher of men.
The Pope is called to evangelize, but how can he do so? In today’s world so many people are hungry for truth, beauty and love, but they have been disappointed by the institutional church and let down by Christians. How shall we proclaim the gospel to those who are hardened against it by disappointment, cynicism and fear?
If the apostles were commanded to go to the ends of the earth with the gospel, the pope from Argentina has gone to the “end of the earth” by going to those on the very fringes of human society. In his work with AIDS patients, the poor and the persecuted, he has shown a Catholic leader who, like Christ the Lord, has come to “seek and to save that which was lost.”
How do we preach the gospel in the modern world? The way is shown us by Cardinal Bergoglio. He has been described as a “Jesuit with a Franciscan heart.” His work with the poor in Argentina and his own simple and austere lifestyle are the proclamation of the gospel our world needs today. His humble posture, prayer filled life and compassion for the poor combined with an uncompromising position on the church’s doctrine and morals will win hearts and minds.
However, the gospel of Christ cannot be merely an inspiring life working with the poor. There must be a solid substance to the gospel message. There must be a sound doctrinal and spiritual foundation or else the gospel is reduced to good works. The philosophical and theological groundwork was established by the stellar work of the philosopher pope John Paul II and the theologian pope, Benedict XVI. The work of the popes always complement each other, so now we have Pope Francis who will show us the way to live the profound truths laid out by his predecessors.
In addition to coming from the “ends of the earth” Pope Francis has chosen a name which sums up his life and which will sum up his papacy. St Francis lived at a time of corruption and wealth in the church. He lived in a time when many were turning away because of the hypocrisy of their church leaders. Then Francis heard God’s call to “re-build my church.” He did so with simplicity, faith and love of the poor. His sudden return to a primitive gospel brought the renewal and reform the church needed–not by new policies and draconian measures, but by simplicity, holiness, service and faith.
As a Jesuit, Pope Francis must also be inspired by the co-founder of his own order, St Francis Xavier. Few saints were more courageous, dedicated and completely sold out for Christ than the missionary to the Far East. If Pope Francis can combine the simple spirit of St Francis with the missionary zeal of St Francis Xavier we will have the world evangelist we need–even if he is a humble friar rather than the charismatic leader we saw in John Paul II.
The English historian Fr Ian Ker has observed that it take fifty years for a general council of the church to really get into the church’s bloodstream. 2015 is the fiftieth anniversary of the closing of the council. The papacies of Paul VI, John Paul II and Benedict XVI have steered us through the turbulent post Council years, but they have also prepared us for the real fruit of the Second Vatican Council–a re-building of the church under the leadership of a new Francis.

Fr Dwight Longenecker is the author of
St Benedict and St Therese–the Little Rule and the Little Way
. Visit his blog, browse his books and be in touch at dwightlongenecker.com.