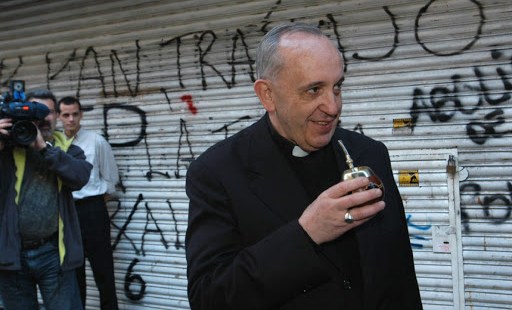 The new Pope took the name of the saint who most embodied the radical poverty of Christ—St. Francis

The election of Pope Francis I is not as dramatic as the election of Pope Benedict XVI was. When Joseph Ratzinger was announced the faithful Catholics in St. Peter’s Square roared for “God’s Rotweiler.” Jorge Mario Bergoglio’s announcement was met mostly by a respectful silence. But there are similarities.

Neither men were on the lists of papabili. Both were on the older side when elected—late 70s—and shy, rather than charismatic. And in both cases, people said to themselves afterwards—Of course! How did we miss this? Ratzinger was Pope John Paul II’s right hand man, and a theological powerhouse. Bergoglio is from Latin America, where most of the world’s Catholics live, and, according to reports, he was the runner-up to Benedict in the 2005 conclave. He was still available this time. Yet he was barely mentioned in the run-up to the conclave.

I have to admit I was humbled when I saw Cardinal Bergoglio’s name and picture flashed on the television screen. My prejudices betrayed me. I saw an older, serious looking man, who I vaguely remembered from the last conclave. He wasn’t the pope I wanted. I immediately searched Google, saying to myself “please don’t let him be a curia hack, someone concerned more about rules and ritualism and preserving the status quo than in communicating the radical message of the Gospel.”

What I read heartened me. He was strongly committed to social justice. What’s more, Wikipedia said that this Archbishop of Buenos Aires “lives in a small apartment, rather than in the palatial bishop's residence. He gave up his chauffeured limousine in favor of public transportation, and he reportedly cooks his own meals.”

I began to understand what the Cardinals had done, and I said a quick prayer to thank the Holy Spirit.  One way we know the Gospel is authentic is that it’s not anything we would have expected. In a similar way, what’s truly surprising and remarkable about Pope Francis I’s election—besides his being the first Jesuit and first Latin American pope—is the spiritual message it sends to Catholics.

What it says is that despite our very human desire for a super-pope with heroic leadership skills who will “fix” the Church, we worship a God who did things differently, who emptied himself and took the path of humility. Jesus Christ and his Church are signs of contradiction to the “powers and principalities” who rule the world. Instead of a powerhouse manager or intellectual who would whip the troops into shape and shame the secular intelligentsia, we got a pope who for the first time took the name of the saint who most embodied the radical poverty of Christ—St. Francis. Il Poverello. The poor one.

But that doesn’t mean God isn’t serious about reforming the Church. It will just be done on his terms, not ours.

In 2003, during the height of the clerical sex abuse crisis in the U.S., the theologian and writer Monsignor Lorenzo Albacete preached a sermon where he made the bracing statement that “if the priesthood isn’t based on the absolute humility of Christ it becomes a monstrosity.”

In an article from the same period, Msgr. Albacete wrote that “instead of trying to ‘clean out’ what comes from human sinfulness,” the Church needed “a new beginning” rooted in the example of its most popular saint:

“In another period of corruption and crisis in the Church, the Lord said to St Francis of Assisi, ‘Rebuild my Church.’ Why was this mission given to St Francis? Because he had made himself nothing, because by embracing absolute poverty he could experience the encounter with absolute gratuitousness. The new beginning is the possibility of the experience of reaffirming this absolute gratuitousness.”

“I do not come from myself; rather, I come from another,” Pope Benedict XVI explained during his visit to the United States. God upholds our very existence at every moment, so we can never be neutral or silent about him. It is the obligation of Christians to awaken the world’s natural desire to love God and others generously through the witness of our lives.

In a time of crisis, it appears that this is the path that Pope Francis I—Pope Poverello—will take the Church.