The Mass for the Election of the Roman Pontiff 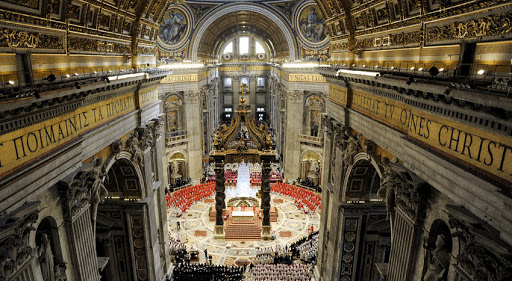 The Good Shepherd lays down his life for his sheep

“‘Forever I will sing the mercies of the Lord’ is the hymn that resounds once again near the tomb of the Apostle Peter in this important hour of the history of the Holy Church of Christ.” Angelo Cardinal Sodano opened his homily this morning with these words inspired by Psalm 88.
As Dean of the College of Cardinals, Sodano presided over the solemn Eucharistic celebration of the Votive Mass Pro Eligendo Romano Pontifice in St. Peter’s Basilica on Tuesday morning. The Mass opened the historic Conclave for the election of the successor of Benedict XVI.
According to the Apostolic Constitution Universi Dominici Gregis and relevant modifications prescribed by Benedict XVI in his Motu Proprio, Normas Nonnullas (art. 49), “this celebration should preferably take place at a suitable hour in the morning, so that in the afternoon the prescriptions … of this Constitution can be carried out.” These prescriptions outline the process whereby the Conclave is to assemble.
The 115 Cardinal Electors processed into St. Peter’s Basilica in reverse order of precedence: first the Cardinals of the Order of Deacons (from Harvey to Tauran), followed by the Cardinals of the Order of Priests (from Tagle to Daneels), and lastly the Cardinals of the Order of Bishops, who number only four: the Patriarchs of the Oriental Churches – Maronite Patriarch Bechara Boutros al-Rai and Patriarch Emeritus of the Coptic Catholic Church, Antonius Naguib – as well as the Cardinal Camerlengo, Tarcisio Bertone, and Giovanni Battista Re, who will preside over the Rite of the Conclave.
The readings were those used in 2005 during the Mass presided over by the then Dean of the College of Cardinals, Joseph Ratzinger.  The first reading was a messianic oracle drawn from the “book of consolation” (Isaiah 40-60); the second reading was a passage from St. Paul’s Letter to the Ephesians, which speaks of the unity of the Church as the Mystical Body of Christ; and the Gospel was the commandment of love found in St. John’s Gospel.
Sodano was interrupted by a huge round of applause from the faithful as he recalled “the beloved and venerable Pontiff Benedict XVI, to whom at this moment, we renew our wholehearted gratitude”.
The Dean of the College of Cardinals, who delivered the homily in Italian, recalled the unity of Christians by inviting everyone to cooperate with their pastors in realizing this unity. “Each of us,” the Italian Cardinal said, “ is called to cooperate with the Successor of Peter, the visible foundation of this ecclesial unity.”
“The fundamental attitude of the Pastors of the Church is love,” he emphasized. “It is this love that urges us to offer our own lives for our brothers and sisters”. The Cardinal continued: “The basic attitude of every Shepherd is therefore to lay down his life for his sheep (John 10:15)”.
“This applies above all to the Successor of Peter, the Pastor of the Universal Church” and of “the Church of Rome,” which he said, “presides over the whole assembly of charity,” borrowing the beautiful expression of St. Ignatius of Antioch.
“Do you love me more than these?” (Jn. 21:15-17). The question Jesus addressed to Peter, Cardinal Sodano noted, “resounds in the hearts of every Successor of Peter,” urging them to “the loving service toward the Church and all humanity”.
The Dean of the College concluded by inviting the Cardinal Fathers to beg the Lord to grant the Church “a Pontiff who will embrace this noble mission with a generous heart.”
Quoting the general intercession offered during the Mass in Swahili: “May the Lord fill the hearts of the Cardinals with his Holy Spirit of knowledge and counsel, of wisdom and discernment.”