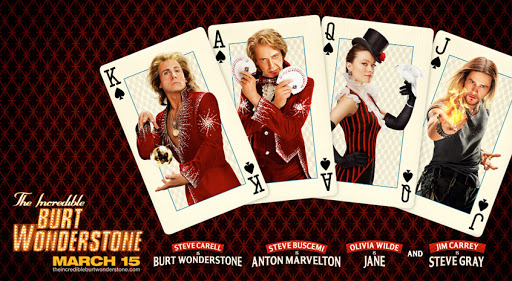 Burt Wonderstone could be more incredible

This week, it’s one magician pitted against another as The Incredible Burt Wonderstone attempts to topple Oz, The Great and Powerful from atop the box office standings. Don’t expect it to succeed in that trick, however, as Steve Carrell’s latest starring vehicle is likely to pull a quick disappearing act. To be fair, the movie manages to pull a fair share of laughs out of its sleeves (the revelation of how Burt’s final trick is pulled off is almost worth the price of admission alone), so its not a complete waste of time. Just don’t be surprised if you can’t remember too much about The Incredible Burt Wonderstone a few weeks after you’ve seen it.

For one thing, the story is so by-the-book formulaic, it’s as if the screenwriters had a checklist of the ‘Hero’s Journey’ taped to their laptops the whole time they were churning out pages. Following a prologue in which two bullied boys forge a lifelong friendship through their love of magic tricks, the movie introduces us to the now adult duo of Burt Wonderstone and Anton Marvelton, a thinly disguised (okay, not really disguised at all) parody of legendary Las Vegas magicians Siegfried & Roy (albeit without the tigers, German accents, or gay subtext). It seems that after a decade of headlining a multi-million dollar production, Burt has lost the thrill of performing magic and become something of a jaded misogynistic narcissist. He alternately insults and ignores his partner while routinely chasing off their female assistants with his boorish behavior.

Burt’s self-centered world begins to crumble, however, after audiences begin to desert his repetitive old-fashioned magic show in favor of the new and edgy antics of television magician Steve Gray, the “Brain Raper” (Jim Carrey’s spot-on spoof of anxious illusionist Chris Angel). After his show is shut down and he learns he has squandered his fortune, Burt is forced to accept a number of menial jobs performing at supermarkets and birthday parties. Things finally begin to look up, though, when Burt accepts a job entertaining at a retirement home for faded Las Vegas performers.

It’s here where Burt meets Rance Holloway, the man who originally inspired him to take up magic in the first place. Under Rance’s wizened tutelage, Burt begins not only to rediscover the sense of wonder in performing magic, but also what it means to be a decent person again. With renewed purpose, Burt reassembles his old gang in order to compete against the Brain Raper in a winner-takes-all talent contest to see who will secure the headliner contract at Las Vegas’ newest hotel. So, as you can see, for a story about magic, there are sadly few surprises to be had in the narrative – a shortcoming that would be fine if the characters were a little more interesting.

Carrell is his usual funny self as Burt Wonderstone, but the character is basically a one-note joke (and an old one at that – Siegfried & Roy retired ten years ago), and even Carrell seems relieved when the plot finally reaches the point where he can abandon the caricature and start acting like a real person. Steve Buscemi is underutilized as Carrell’s put upon partner, a point emphasized by the fact that one of the movie’s best gags comes when it follows Anton by himself to South America, where he engages in some misguided charity work passing out magic kits to starving children. Olivia Wilde does her best with her role as Jane, the aspiring magician who can’t get Burt to use her real name (he calls every woman Nicole, the name of the first assistant he chased away, because women’s real identities have no importance to him), but in the end she’s pretty much just “the girl.” At least Alan Arkin as the aged Rance Holloway is reliably Alan Arkin, so the movie has that going for it.

In all probability, however, the only character in the film most people will commit to memory is Jim Carrey’s Steve Gray. While a supporting role might seem like something of a demotion for Carrey, it’s actually an inspired choice when considered in the context of other famous ‘third leads’, such as Zach Galifianakis in The Hangover, or Harpo Marx in everything he ever did. He’s the character who gets to break the rules and bring a touch of madness and danger to the proceedings (just imagine meeting someone like Harpo from Duck Soup in real life; the idea is frightening). Carrey’s penchant for unrestrained physical comedy is tailor-made for roles like Steve Gray and he hasn’t been this enjoyable in years. His increasingly masochistic ‘magic’ acts, such as the televised stunt wherein he refuses to go to the bathroom for days (his body now contains more urine than blood, he should be dead, intones a doctor), are probably the highlight of the movie.

It’s a shame The Incredible Burt Wonderstone isn’t just a tad bit more… incredible, because the meta-commentary the movie appears to be making on modern comedies is actually an interesting one. Over the past decade, theaters have been besieged with one gross-out flick after another (Knocked Up, The Hangover, Bridesmaids, etc.) – movies whose laughs depend not so much on the quality of their writing, but more on the shock value of such things as uncomfortable sexual situations or uncontrollable bodily functions. And with the impending release of such offerings as The Hangover, Part III and the sure to be wretched InAPPropriate Comedy, featuring Rob Schneider & Lindsay Lohan (shudder), the trend shows no signs of disappearing anytime soon.

But the odd thing is that The Incredible Burt Wonderstone seems to be saying that maybe it should. You see, Jim Carrey’s Steve Gray – with his crass behavior and wince-inducing performance art (seriously, there’s one scene involving a razor which will make many people turn away from the screen in disgust) – is a character who could easily exist in any of the aforementioned gross-out comedies, and yet in this movie, he’s the bad guy; the obstacle which must be overcome so that the people can once again revel in the delights of real talent. The Incredible Burt Wonderstone seems to be saying that whatever pleasures one might find in the transient shocks of sensationalism are no match for the substantial joys of tradition, at least as long as the traditional way of doing things is carried out with the proper heart and spirit – and that’s a notion any good Catholic viewer can get behind. If only The Incredible Burt Wonderstone had backed up its message with something of actual quality, more people might pay attention to it. There’s a lesson in there somewhere, I think.