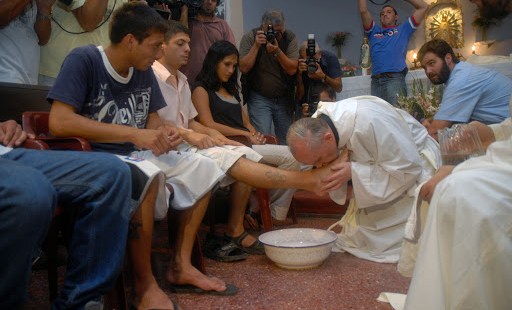 In a sudden change of plans, the Vatican has announced that Pope Francis will celebrate Holy Thursday Mass at local juvenile prison and wash the feet of twelve inmates. Rocco Palmo at Whispers in the Loggia has the story:
In a sudden announcement this morning from the Holy See, Pope Francis has yet again turned Vatican protocol on its head – shredding the earlier plan of beginning the Easter Triduum in St Peter's Basilica, the new pontiff has instead opted to go to a juvenile prison in Rome to celebrate Holy Thursday's Evening Mass of the Lord's Supper, at which he'll wash the feet of 12 inmates.
[…]
Over recent decades, the Popes have washed the feet of 12 retired priests of their diocese at the liturgy. As the facility Papa Bergoglio has chosen for the Mass comprises both male and female inmates, given his prior practice, a long-standing flashpoint for the church in the "developed" world – namely, the inclusion of women in the Mandatum rite – could well see its most authoritative verdict to date in Francis' actions next week.