A Franciscan, even before choosing the name ‘Francis’ 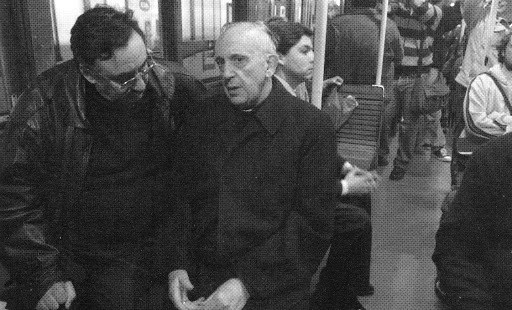 Beccegato: for the Pope, simplicity is a way of life

Fighting material and spiritual poverty, promoting peace and building bridges: these were the instructions Pope Francis left with representatives of 180 members of the Diplomatic Corps accredited to the Holy See, whom he received in audience on Friday, 15 March.

Aleteia spoke with Paolo Beccegato, head of the Italian branch of Caritas Internationalis, just after Caritas’s meeting in Rome on the emergency crisis in Syria.


Pope Francis has drawn attention to the poor in all the addresses he has delivered to date. It seems he is becoming a sponsor for Caritas …

The Pope is reiterating something that has always been a fundamental issue for him. Caritas Italia had the opportunity to collaborate with Caritas Argentina during the most difficult years of the financial crisis that hit that country from 2001 to 2004. During those years, we had frequent contact with the then-Archbishop of Buenos Aires, Jorge Mario Bergoglio. Through this contact, we sought to deal with the question of the general impoverishment of people who had been deprived of economic resources, even to the point of forced withdrawals from bank accounts.

We can testify that the issue of attention to the poor has always been not only the mark of the current pope’s organization of the Church and pastoral action, but also of his own way of life. Now everyone is beginning to discover that he used public transportation and that he cooked for himself. But prior to this it wasn’t ‘news’; it was his everyday way of life. He is spoken of as an able communicator and it is true, but only because what he says is what he has lived both personally and within the archdiocese. We might say that he chose a Franciscan way of life before he chose the name Francis.


The Pope has emphasized that poverty is not only material …

It is a further emphasis with respect to recent days; however, it is consistent with his message to the diplomatic corps. The pope cited the “dictatorship of relativism” highlighted by Benedict XVI to underline how being the only measure of oneself ultimately leads to conflict with others, and to war. Francis points to a Christian anthropological vision of a man who is open to transcendence, as a step towards peace between persons and nations.

This year we commemorate the 50th anniversary of the encyclical, Pacem in terries, wherein Blessed John XXIII proposed Truth with a capital  ‘T’, i.e. Christ, as a pillar for peace. If, instead of seeing myself as the center of attention, I open myself up to relationships, I won’t look upon others as adversaries.


What message has Pope Francis proposed to governments?

Charity, peace, and the protection of creation are the three keys to interpreting his pontificate.  For the governing of States and diplomatic actions, this means passing more policies to help achieve greater social justice on behalf of the poor, seeking non-violent ways for nations to relate with one another, and pursuing binding political agreements banning the degradation of the environment, deforestation and pollution. Francis used a strong expression: “do not greedily exploit of the earth.” Viewed from below, at the level of each one of us, this means paying attention to the poor and to the distribution of wealth. Viewed from above, i.e., at the government level, this means, for example, implementing the Kyoto Protocol on the environment or not replicating the quasi-failure of the Doha summit on climate change.


Pope Francis’ first gestures and words have aroused great enthusiasm. Will this bring greater attention to the issues you mention?

Everyone I meet or hear from through my international contacts has been quite struck by Francis. I believe that Providence always sends us the right pope for the right time. Benedict XVI, with his meek yet firm style, stood as a strong reference point in a time that sorely lacked them, by standing against relativism as a philosophical and ethical vision. Francis is the first Latin-American pope, and in this people perceive a message of great newness, which is also tied to his experience of sharing life with the poor. The Church is mater et magistra – mother and teacher. Perhaps before she was more a ‘teacher’, and now she is more a ‘mother’. The message does not change; it’s the Gospel, but is articulated in a different ways, both in tone and style.