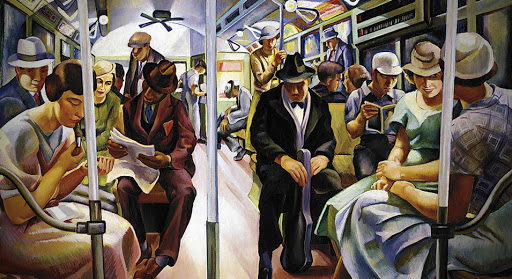 The subway was crowded – like, honest-to-God-shoved-in-like-sardines crowded.  My kids were pressed against me, their height meaning that all they could see was a solid wall of torsos and backpacks.  I was tall enough that my head broke the surface, which required me to play that most odd of public transit games: Do Not Make Eye Contact With Fellow Passengers.

Instead, I kept my eyes firmly trained on the pole that I was hanging on to.  Below my hand were the smaller hands of my two children.  Above mine was the hand of a stranger, the perfect smoothness of the skin at odds with the owner, a twenty-something man dressed in clothing that registered “construction worker,” his face grimy and vaguely sweaty, despite the chill to the air.

As the train sped along to Grand Central Station, I watched in fascination as the man’s hand slowly slipped down the pole, closer and closer to mine.  Our hands briefly touched, through my peripheral vision I could see the man jump slightly, and his hand immediately moved away.  I looked down at my kids, still smashed up against me and stoically enduring the ride, then back at the man’s hand, which was slowly sliding down towards mine again.

I risked a glance at him.  He was leaning up against the train wall, eyes closed, mouth partly open.  I smiled a little.  How long do you have to live in New York City, and how tired to you have to be, to be able to fall asleep on the subway?  The man’s arm relaxed more, his hand touched mine again, and he jerked awake at the sudden physical contact, so unexpected that it was enough to wake him, when all the jostling and noise of the subway didn’t.

This time, I threw caution to the wind and looked at him.  I smiled right into his eyes, and he sheepishly, shyly smiled in return, then looked away and shoved his hands into his pockets.  The subway stopped; I pried myself and my kids out of the train, and left the man behind, thinking about how much better it is to wake up to see a smiling face rather than indifference or a scowl.

The day before, I had participated in the Twitter campaign to get the Kermit Gosnell story into the mainstream media and to keep it there.  At first, I retweeted articles and opinions half-heartedly.  This sort of social media “protest” was the very epitome of ‘slactivism’ in my mind: you press a button on your mouse and patted yourself on the back, thinking you did something to affect change, but couldn’t be troubled to do anything more.  The ultimate symbol of our isolated technological world.

But then I started to read some of the tweets filed under #Gosnell.  Here and there, peppered among the cries of outrage and calls for justice, were people saying things like, “I’d never heard of this case.  My heart is broken.  How come no one is talking about this?”  or “I’m pro-choice, but stories like this make me realize things have gone too far.”  Small voices of people suddenly jerked awake by the unspeakable horror of the Gosnell story.  Like the man on the subway, a brief, unexpected moment of contact shocked them into awareness.

I wondered what would happen to those people, suddenly, unexpectedly, finding themselves asleep no longer.  Would they look around, see nothing but the familiar faces of other sleepers, and let themselves close their eyes and drift off again with a shrug and a, “that was odd”?  Or would they find angry, hostile faces surrounding them, a sea of people reflecting the fury and horror of the abortion industry in their own faces.

As I scrolled through the tweets, I came across a few voices that offered something different.  They called for prayers – not only for the victims of Gosnell, but also for the man himself.  They asked the faithful to pray for all mothers finding themselves in desperate situations, with unplanned pregnancies.  They offered hope and peace in the middle of the ugliest things human beings can do to each other.

I hoped the Twitter users who had found themselves jerked awake by the abomination of Gosnell’s crimes came across those gentler tweets.  I hoped that they were able to find a kind face to focus on, because otherwise, what reason would they have to stay awake?  If your waking world is full of bigger nightmares than your dreamscape, what would convince the average person to do anything other than close their eyes and block it all out?

I don’t think that my smiling moment with the man on the subway made any great changes.  It was probably my imagination that he moved a little closer to the side, allowing the woman next to him a bit more room, who in turn may have had the flicker of a smile on her face as she watched my children leaving the train.  It could have happened that way.  Or the man may have forgotten about me the moment he looked away, gone on to kick a kitten somewhere, and yell at his neighbor.  The people on twitter may have had a flicker of doubt about their pro-abortion beliefs, read responses full of authentic love and forgiveness, and gone on to have a conversion of the heart, or they may have logged off Twitter, gone on to kick a kitten somewhere, and donated a large sum of money to Planned Parenthood.  It can’t be known, and it isn’t for us to know.

We’re called to plant seeds wherever we go, and to warm the seeds planted by others through the light of Christ that we allow to shine through us.  Sending out a prayerful tweet or smiling at a stranger on the subway is not a big thing.  But, as St. Thérèse says, “Miss no single opportunity of making some small sacrifice, here by a smiling look, there by a kindly word; always doing the smallest right and doing it all for love.”

Without love, everything we do is ‘slactivism.’  But when we do things out of love of God, even a momentary smile on a subway becomes an opportunity for someone to wake up and set themselves on a path to Heaven.