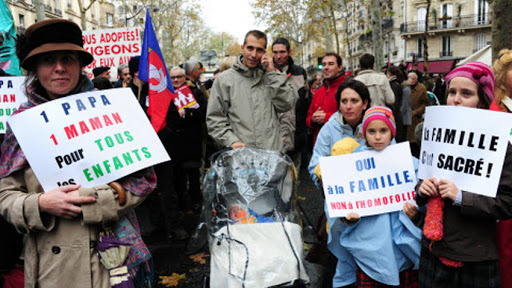 The change comes after months of debate and protests

Paris, France, Apr 23, 2013 – After months of debate and massive protests, the National Assembly in France passed President Francois Hollande’s “marriage for all” bill in to law on April 23.
With 331 votes in favor to the 225 votes against, the lower house approved President Hollande’s draft law which now legalizes “gay marriage,” allows gay couples to receive medical treatment for artificial procreation and to adopt children.
This vote comes after months of protests which saw unprecedented crowds taking to the streets on several occasions to condemn the bill.
One group, La Manif Pour Tous, has organized many of the events, and reported over 1.4 million participants at the March 24 rally in Paris to protest President Hollande’s measure.
The group argues that the now-law is “profoundly discriminatory” towards children since those adopted by two men or two women will, by law, no longer have a mother and father but a “Parent 1” and “Parent 2.”
“(Children) will be deprived of half their origins,” the group said in a statement on their website. “It paves the way for a new, ‘social’ parentage unrelated to human reality. It creates a framework for a new anthropological order founded not on sex but on gender, that is, sexual preference.”
Last week a group of 14,900 French mayors said they would refuse to perform marriage ceremonies for same-sex couples, while some even said they would resign if the measure passed.
Opponents say they have no plans to end the protests and have already organized one to take place in Paris at 7 p.m. local time.