Pentagon May Court Martial Soldiers Who Share Their Faith? Not Quite 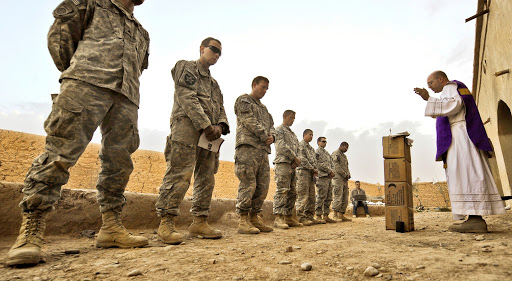 Incidents ruled on a case-by-case basis, the statement said

UPDATE 5/3/2013: The evangelical Christian magazine RELEVANT has contradicted earlier reports that Christian soldiers could be court martialed simply for sharing their faith. The Defense Department said instead that a person could be cour martialed if they continued to push something on someone who did not want it. From RELEVANT magazine:
Soldiers are free to share their religious beliefs with one another, as long as they do so respectfully. In a statement, Pentagon spokesman Navy Lt. Cmdr. Nate Christensen said that "Service members can share their faith (evangelize), but must not force unwanted, intrusive attempts to convert others of any faith or no faith to one’s beliefs (proselytization)." So, no need to freak out at the moment. Lt. Cmdr. Christensen went on to say that "all service members are free to exercise their constitutional right to practice their religion in a manner that is respectful of other individuals’ rights to follow their own belief systems; and in ways that are conducive to good order and discipline; and that do not detract from accomplishing the military mission" …

The Pentagon has released a statement confirming that soliders who promote their religious faith to others could be court martialed or receive other punishments. The statement said that punishments would be given on a case by case basis. Breitbart has the story:

The Pentagon has released a statement confirming that soldiers could be prosecuted for promoting their faith: "Religious proselytization is not permitted within the Department of Defense…Court martials and non-judicial punishments are decided on a case-by-case basis…”.

The statement, released to Fox News, follows a Breitbart News report on Obama administration Pentagon appointees meeting with anti-Christian extremist Mikey Weinstein to develop court-martial procedures to punish Christians in the military who express or share their faith.

(From our earlier report: Weinstein is the head of the Military Religious Freedom Foundation, and says Christians–including chaplains–sharing the gospel of Jesus Christ in the military are guilty of “treason,” and of committing an act of “spiritual rape” as serious a crime as “sexual assault.” He also asserted that Christians sharing their faith in the military are “enemies of the Constitution.”)