Why Pope Francis Doesn’t Give Communion 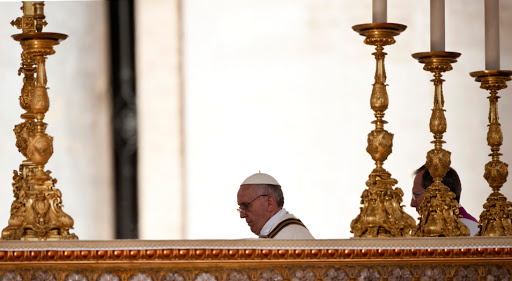 Unrepentant public sinners can slip in among the faithful, says the Pontiff

There is one particular in the Masses celebrated by Pope Francis that raises questions that have so far gone unanswered.

At the moment of communion, pope Jorge Mario Bergoglio does not administer it himself, but allows others to give the consecrated host to the faithful. He sits down and waits for the distribution of the sacrament to be completed.

The exceptions are very few. At solemn Masses the pope, before sitting down, gives communion to those assisting him at the altar. And at the Mass last Holy Thursday, at the juvenile detention facility of Casal del Marmo, he wanted to give communion himself to the young detainees who approached to receive it.

Bergoglio has given no explicit explanation of this behavior since becoming pope. But there is one page in a book he published in 2010 that allows one to infer the motives at the origin of this practice. The book is a collection of conversations with the rabbi of Buenos Aires, Abraham Skorka. At the end of the chapter dedicated prayer, the then-archbishop Bergoglio says:

"David had been an adulterer and had ordered a murder, and nonetheless we venerate him as a saint because he had the courage to say: 'I have sinned.' He humbled himself before God. One can commit enormous mistakes, but one can also acknowledge them, change one's life and make reparation for what one has done. It is true that among parishioners there are persons who have killed not only intellectually or physically but indirectly, with improper management of capital, paying unjust wages. There are members of charitable organizations who do not pay their employees what they deserve, or make them work off the books. [. . .]

With some of them we know their whole résumé, we know that they pass themselves off as Catholics but practice indecent behaviors of which they do not repent. For this reason, on some occasions I do not give communion, I stay back and let the assistants do it, because I do not want these persons to approach me for a photo. One may also deny communion to a known sinner who has not repented, but it is very difficult to prove these things. Receiving communion means receiving the body of the Lord, with the awareness of forming a community. But if a man, rather than uniting the people of God, has devastated the lives of many persons, he cannot receive communion, it would be a total contradiction. Such cases of spiritual hypocrisy present themselves in many who take refuge in the Church and do not live according to the justice that God preaches. And they do not demonstrate repentance. This is what we commonly call leading a double life.”

As can be noted, Bergoglio explained in 2010 his abstaining from giving communion personally with a very practical reason: "I do not want these persons to approach me for a photo."

As an experienced pastor and a good Jesuit, he knew that among those who receive communion there could be unrepentant public sinners who nonetheless professed themselves to be Catholics. He knew that at that point it would be difficult to deny them the sacrament. And he knew the public effects that that communion could have, if received from the hands of the archbishop of the Argentine capital.

One could infer that Bergoglio may sense the same danger as pope, indeed even more so. And for this reason he would be adopting the same prudential conduct: “I do not give communion, I stay back and let the assistants do it.”

The public sins that Bergoglio gave as examples in his conversation with the rabbi are the oppression of the poor and the withholding of just wages from the worker. Two sins traditionally listed among the four that “cry out to heaven for vengeance.”

But the reasoning is the same that in recent years has been applied by other bishops to another sin: public support for pro-abortion laws on the part of politicians who profess themselves to be Catholic.

This latter controversy has had its epicenter in the United States. In 2004, then-cardinal Joseph Ratzinger, prefect of the congregation for the doctrine of the faith, sent to the episcopal conference of the United States a note with the “general principles” on the question. The episcopal conference decided to “apply” on a case-by-case basis the principles recalled by Ratzinger, leaving it up to the "individual bishops to make prudent pastoral judgments in [their] own circumstance.”

From Rome, Cardinal Ratzinger accepted this solution and called it “in harmony” with the general principles of his note.

In reality, the bishops of the United States are not unanimous. Some of them, including among the conservatives, like cardinals Francis George and Patrick O'Malley, are reluctant to “make the Eucharist a political battleground.” Others are more intransigent. When the Catholic Joe Biden was chosen as vice-presidential running mate by Barack Obama, the archbishop of Denver at the time, Charles J. Chaput, now in Philadelphia, said that Biden's support for the so-called “right” to abortion was a grave public fault and “I presume that his integrity will lead him to refrain from presenting himself for communion."

The fact remains that last March 19, at the Mass for the inauguration of the pontificate of Francis, vice-president Biden and the leader of the House Democrats, Nancy Pelosi, she too a pro-abortion Catholic, were part of the official delegation of the United States.

And both received communion. But not from the hands of pope Bergoglio, who was seated behind the altar.