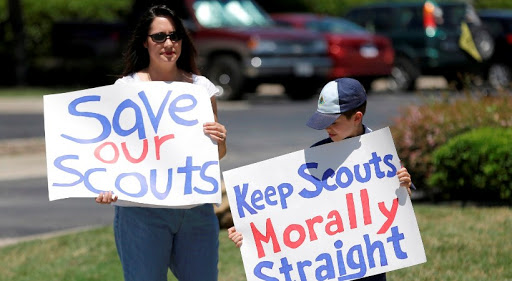 Gay men are still not allowed as troop leaders

The Boy Scouts of America has voted in favor of a resolution that lifts the ban on openly gay members but will not allow gay adult troop leaders.
During its annual meeting in Grapevine, Texas, some 1,400 Boy Scouts delegates voted on whether or not the groups should lift its ban on openly homosexual youth members.
The resolution, which allows gay youth members, was passed with an over 60 percent majority of votes.
In a May 22 op-ed for USA Today, Boy Scouts of America President Wayne Perry said the resolution to lift the ban on openly gay scouts “reinforces that Scouting is a youth program, and that any sexual conduct, heterosexual or homosexual, is contrary to the virtues of Scouting.”
The resolution, he explained, will not allow “the use of the organization to promote or advance any social or political positions or agendas.”
The announcement of the resolution follows several months of policy review after the Boy Scouts lost funding from high-profile donors such as UPS, Merck and Intel over the old rules, which barred openly gay members. In 2000, the Supreme Court upheld this policy as a constitutional expression of free speech.
The organization decided to delay a vote on the issue back in February, citing the complexity of the issue and need for dialogue and review.
The new resolution, which will go into effect Jan. 2014, will continue to prevent gay adults from serving as troop leaders.
The resolution affects only the national policy and allows each local unit to set its own guidelines, allowing “the religious, civic, or educational organizations that oversee and deliver Scouting to determine how to address the issue.”
Many pro-family groups, including Concerned Women for America, Catholic Family and Human Rights Institute and Family Research Council, had urged the scouts to continue their old policy, arguing that it helps to protect scouts from sexual abuse and aligns with the group’s founding morals.

Originally published by Catholic News Agency on May 23rd, 2013.