Data Mining My Family, Poop Jokes and All 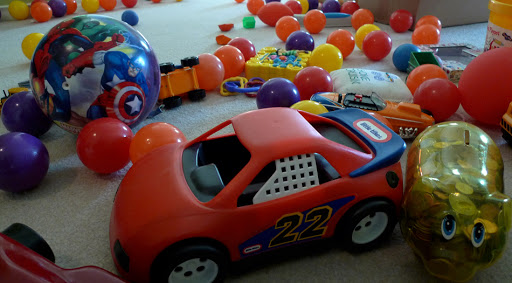 I’m a giver, what can I say?  Data mining can be so tiring, I’m sure.  Sometimes an overworked member of the intelligence community just needs a shorter version of an individual’s internet activity.

Let’s start with phone records, shall we?  Since our cell phones don’t work in our home, and I rarely leave the house anyway, we’re really only dealing with a landline, which is the good news for the hard-working folks reading through my phone transcripts.  The bad news is that ever since watching Enemy of the State over a decade ago, my husband and I have routinely peppered the most mundane conversations with trigger words like “bomb” and “president.” In other words, everything’s going to look like a terrorist plot on paper.

Husband:  Hey, honey.  How’s your day going so far?
Me:  Pretty good.  Except the baby just dropped a diaper BOMB during her nap.
Husband:  Woosh.  Well, I can’t say I’m sorry to miss that.  Sounds EXPLOSIVE.
Me:  And stinky.  I can’t wait until this one is potty trained.
Husband: Me too.  I’m a fan of potty-trained kids.
Me:  I’m PRESIDENT of the potty-trained kids fan club.

Sorry, government agents tasked with plowing through our phone calls; there’s lots of poop talk around here.  But, seeing as how you’re working for a man who has publically asked God to bless the nation’s largest abortion provider, you’re probably used hearing lots of poopy statements.

Now on to email records. Right off the bat, anything coming from a man named “Brian” can be ignored.  That’s my dad, and his emails consist almost entirely of forwarded jokes.  And while his jokes routinely bomb, they’re not actual bombs, so do yourself a favor and just hit delete on those.

As for the rest of the email I get or send, it’s mostly about the fascinating topics that pertain to mommy blogging.  And while the hand that rocks the cradle rules the world, there are no threats to domestic security here unless you’re working for a man who views babies as a punishment and voted against legislation that would protect children born during an abortion.

But come on, that’s crazy talk!  That sort of man would be a monster, and would never elected to a role of power. (Right?)

As for our Google searches, well… this one will probably be the brunt of your work here.  As a homeschooling family, we run a lot of Internet searches.  Why, just this morning we’ve run searches on the egg hatching process in chickens, stabilized versions of the Patterson-Gimlin Bigfoot film, tick removal advice, and how to make your own backyard catapult.  The boys have been told “no” on the catapult repeatedly, but hope springs eternal and all that.  You know boys – they bitterly cling to their religion and their backyard catapults.

Oh, and just as a heads up, we’re going to start running lots of searches on the Constitution in general and the Fourth Amendment in particular this week.   Maybe I’ll have the kids write an essay on how a government that spies on its own citizenry in the name of national security is not a government worth keeping.