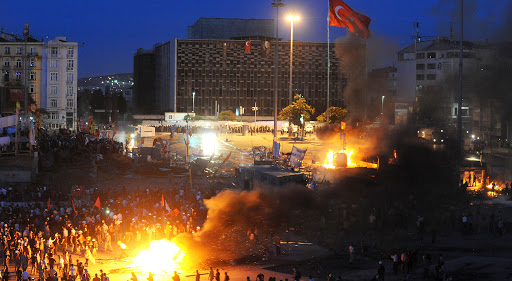 After Police stormed Takism Square to disperse a 10,000 strong anti-government demonstration, the protestors have re-grouped and don’t seem to be leaving any time soon. Reports are now in that Prime Minister Erdogan is open to a referendum being held over the redevelopments of Gezi Park, which sparked off the protest in the first place.
The demonstrations began on the 31st of May, against the redevelopment of Gezi Park (in Takism Square), which is one of the few “green” areas left in Istanbul. However besides environmental factors, the park has a particularly symbolic meaning for the more secular citizens.  The plans for development included replica Ottoman-era barracks as well as a Mosque on the square (despite an abundance of Mosques that already exist in the city).
Although protests began peacefully and relatively low key, the response by police quickly set off a much wider demonstration across the country. After an initial attempt to clear them off the square with water cannons and tear gas, thousands of people erupted onto the streets of Istanbul and throughout the rest of the country.
On Tuesday police once again took to the immense crowd on Takism Square with their water cannons, tear gas and rubber bullets.
Anger was sparked among the protestors and many of them fought back. Reports say that over 5,000 protestors and 600 policemen have been injured in the skirmish.
The extent of police force has ignited a nationwide indignation. Although the Square was largely cleared by police, protestors have now regrouped in Gezi Park, with many accusing Erdogan and the AK party of being authoritarian.
After no signs of protests ending any time soon despite Police intervention, there has been growing concern in parliament that there is no clear way out of this civil unrest that has gripped the nation over the past two weeks.
Protestors accuse Erdogan of imposing Islamic values on Turkey, which is supposed to be a secular state.
Mr Celik, the deputy chairman of the leading AK party has now stated that it is open to the possibility of a referendum to decide the fate of Gezi Square and the re-development plans for it. “In democracies only the will of the people counts” he remarked. “We think that after this gesture of goodwill, people will decide to go home.”
However it appears that Erdogan and his government will not be tolerant to any more persistence by demonstrators, as Celik remarks that those “who seek to provoke and remain in the park will face the police”.
This is no futile comment. As we have seen from the last two days, the Turkish police really do mean business.
Many of the protestors have seen it as a violation of their fundamental right to freedom of speech. Lawyer Mehmet Toker said “our friends who had been detained in Istanbul were taken under custody just because they were reading a press release…we are here to defend freedom of speech”.
Lawyer Ege Inal condemned the authority’s behaviour. “The government is exactly like the ones that they have been criticising” he says. “That is why we are here.”
The protestors are comprised of people from all walks of life, and they have formed a negotiating committee called Takism Solidarity Platform, who will speak to the government on behalf of the demonstrators. The committee is made up of academics, architects and environmentalists.