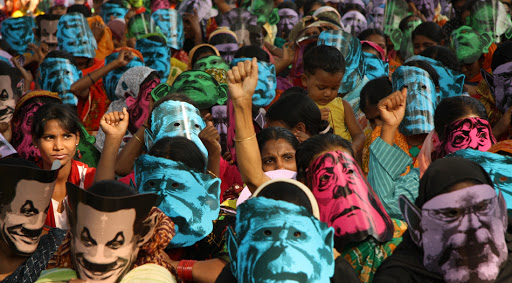 The hasty move is intended to revive trade privileges in the US, which were suspended recently following the deadly Rana Plaza factory collapse and the Nazreen Fashion factory fire in November last year, which together killed nearly 1,300 workers. The US had scolded the Bangladesh government for failing to meet international labor standards.

The Home Ministry said yesterday that it has begun proceedings to withdraw cases against Babul Akhter and Kalpana Akter, president and vice-president of Bangladesh Garment and Industrial Workers Federation, one of the largest labor rights groups in Bangladesh.

“We were charged because we work for labor rights and we are colleagues of Aminul Islam, who was gruesomely murdered for being vocal for worker rights,” said Babul Akhter. “Now we can prove that we never incited labor unrest.”

He also said that he had asked police to speed up the investigation into the murder last April of Aminul Islam, organizer of the Bangladesh Centre for Workers Solidarity. A reward for the capture of the killer has been offered.

The labor group is affiliated with the American Federation of Labor and Congress of Industrial Organizations (AFL-CIO), the largest trade union in the US.

Six years ago AFL-CIO lodged a complaint with the US government over poor workplace safety and labor rights in Bangladesh. This resulted in the suspension of the Generalized System of Preferences (GSP), which offers 127 developing countries, including Bangladesh, the opportunity to export up to 5,000 types of products duty free to the US.

The decision has raised concerns in Dhaka that other key markets may follow suit, including the European Union. The EU is Bangladesh’s single largest market for garment exports, an industry worth $20 billion per year.

Rosaline Costa, a Dhaka-based Catholic rights activist, says these “eyewash moves” regarding the court case against the labor leaders are rooted in the ruling Awami League’s campaign for elections next year.

“After GSP suspension by the US, the government is under immense pressure from the US and EU to improve labor rights and worker safety. The withdrawal of cases against labor leaders is for political gains and there is no guarantee they won’t be charged after their political interests are restored,” she said.