What’s So Important About the Virgin of Aparecida? 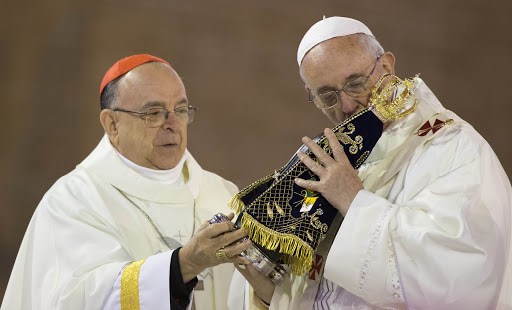 Discovered by a fishermen in 1717, the image has been associated with many miracles and is iconic of Brazilian Catholicism

On Wednesday, Pope Francis visited the enormous basilica dedicated to Our Lady of Aparecida. Who is she, and why does she matter?

The tiny clay image of the Blessed Virgin represents Mary under her particular title as Patroness of Brazil. Travelers to the country testify to her presence as a sign of Brazilian Catholicism. She is seen on bumper stickers and posters, her image is made into jewelry, and replicas of the Virgin of Aparedica adorn most Catholic homes, businesses, and schools.

Jenny Barchfield of the Associated Press quotes Father Jose Arnaldo Juliano dos Santos: "Her face is the face of the Brazilian people. She’s the great unifier of Brazil, who reaches across all sorts of divisions of race, class, region, and religion, and brings us all together as a people."

Just fifteen inches tall, the image of the Virgin of Aparecida stands over a crescent moon with her hands lifted to her breast in prayer.  She gazes upward with a beatific smile on her face.

She appeared in 1717 in a small Brazilian town. Some fishermen hauled up the image in their net and, after a night of empty netted fishing, pulled in a great catch. After the image remained in the fisherman’s family for 15 years, a series of miracles began to be attributed to her. Pilgrims flocked to the little image, and a series of churches were built in her honor, culminating in the huge basilica that now houses the statue.

Secular commentators on the Pope’s visit to the Shrine of Our Lady of Aparecida are inclined to connect the dark color of the statue with the multi-racial and African-rooted population of Brazil. Barchfield quotes a theology professor from Brazil, Fernando Altemeyer: "We are a nation of African descendants, so this black Virgin in a country of blacks has a huge place of honor. For black Catholics, Our Lady of Aparecida is obviously the same color as they are. It’s the feeling of ‘She’s black, like us!’ so it’s incredibly important for them."

Perhaps, but the fact is the original image would have been painted in bright, realistic colors, and the statue’s present dark complexion has more to do with the fact that she was underwater for decades and the accumulation of soot from candles than any intention that she be a “Black Madonna.” And while there is nothing wrong with Afro-Brazilians identifying with the Virgin of Aparecida in this way, her true significance is greater.

The main importance of the Virgin of Aparecida is therefore not the charming legend of her discovery by fishermen or the stories of miracles, but the fact that her image is that of the Immaculate Conception. This connects her to that great Marian image in Mexico as well as to the Patroness of the United States. It is no coincidence that this dogma of the Church surged into prominence and importance in the 16th and 17th centuries, culminating in the definition of the dogma in 1854. This was the age of revolution and reform that saw the rise of rationalism and secular humanism.

Why is the Immaculate Conception important? The dogma of the Immaculate Conception of the Blessed Virgin Mary is the belief that God interrupted the flow of human history by a special act and preserved Mary from the stain of original sin from the first moment of her conception. This action of God reminds us of two important truths – truths which have been obliterated in the rationalist, secular-humanist modern world.