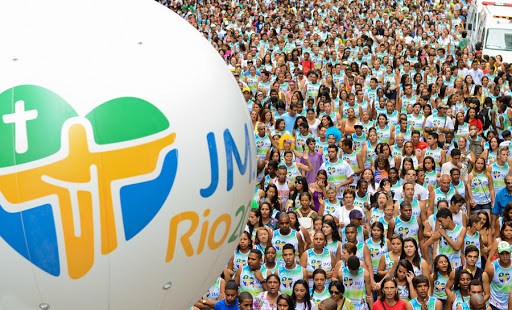 “Take care of the two extremes of life: the elderly and the young. Do not let them be excluded and do not water down the faith.” This is what Pope Francis asked of the young Argentines who met with him this morning at the Cathedral of San Sebastián in Rio de Janeiro.

In a meeting scheduled almost at the last minute “thanks to the skill of Dr. Gasbarri,” Argentine pilgrims had the opportunity to be with their compatriot, Pope Bergoglio: “I suggested to Dr. Gasbarri that we find a little place to meet with you and at noon he had already arranged everything,” said the Pope, to the excitement of all present.

In his message, the Pope invited young Argentines to spark a “revolution” in the dioceses. “I want you to go out. I want the Church to go out into the streets.” And he insisted that the Church must defend herself by keeping her distance from worldliness, settling in, and the comfort of clericalism. As a Church, we should not live “shut in on ourselves. Institutions are for reaching out. If we do not go out, the Church becomes an NGO, and the Church cannot be an NGO,” said the Pope. His comments stirred up a reaction from all those present, who responded with thunderous applause.

Francis said emphatically: “This world civilization went too far with the worship that it has given to the god of money.” and noted that we are seeing a widespread practice of exclusion, particularly of the two extremes of life: the elderly and the young.

He said that the elderly are not cared for, they are not valued enough, and that they are not allowed to speak. It is a kind of euthanasia, particularly a cultural euthanasia: they not allowed to express themselves. Meanwhile, young people are also excluded: “There are many young people who neither study nor work,” he said, noting that there are no opportunities for the younger generations. “They do not have the experience of the dignity of work,” he said.

“This civilization has led to the exclusion of the two extremes. Young people have to go out and fight for values. The elders have to open their mouths. We need to pass on the wisdom of the people. Do not hesitate to be a cultural reserve that transmits the memory of the people.”

And as a challenge to young people, he said: “And don’t stand against the elderly. Give them their place and let them speak.  You young people and you elderly people are condemned by modern civilization to the same thing: exclusion. This is why you have to work.”

In short, he said: “Turn things upside down. Take care of the extremes of the peoples: the elderly and the young. Do not let them be excluded and do not water down your faith in Jesus Christ.” He also recommended reading the Beatitudes, saying, “If you want to know what practical things you should do, read the Gospel of Matthew in chapter 25. You don’t need to read anything else.”

He then blessed an image of the Virgin of Luján, the Patroness of Argentina, which will go on pilgrimage along with a cross of San Damiano throughout the entire territory of the country. Pope Francis invoked the Virgin’s intercession, asking her “to teach us to go out, to come out of ourselves.” Regarding the cross, he stressed that it is “humility and meekness that speaks to us of the nearness of God.”

And in bidding farewell to his young countrymen, he emphasized: “Pray for me. Remember, I need a lot of prayer.”