Meteor Shower Erupts in the Heavens 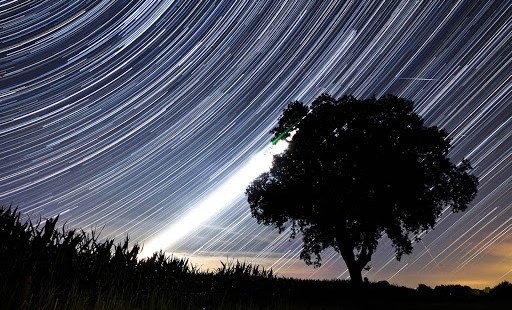 ‘Mother Nature’ put on a spectacular show for folks in Britain at the beginning of this week, pulling out the big guns with her breathtaking Perseid meteor shower.

Stargazers were in for a spot of good luck as the shower reached it’s peak on Monday and that typically awful English weather for some bizarre but blessed reason actually held off; the Sun definitely had his hat on in the run up to the show and he kept it firmly on, as clear skies led us into the night, granting us a perfect window onto the star-strewn, colour bedazzled heavens.

Meteors – or otherwise known by their more romantic name “shooting stars” – are actually a consequence of particles bursting into the Earth’s atmosphere at high speeds. Basically, due to the fact that they fly faster than superman, the air they shoot through gets hotter than a two-dollar-pistol and this manifests a brilliant “streak of light” which is what all of us who can’t fly see all the way down from the ground.

The UK Royal Astronomical Society (RAS) explains that “for the Perseids the material comes from the tail of Comet Swift-Tuttle, which last passed near the Earth in 1992. This shower of meteors appears to originate from a 'radiant' in the constellation of Perseus, hence the name.”

“They mostly appear as fleeting streaks of light lasting less than a second, but the brightest ones leave behind trails of vaporised gases and glowing air molecules that may take a few seconds to fade.”

The Perseid shower gets busy every year from about 17 July until 24 August, but during most of this time there is not actually much to see: the odd shooting star here and there. The real show becomes visible late in the night of 12 August until the early hours of the morning, where up to 60 meteors an hour may be seen. Yet being in the UK, our summers usually involve keeping an umbrella attached to our hips, so the chances of getting a glimpse of the meteor shower are pretty rare indeed; we usually have to content ourselves with a shower of the very watery sort.

However this year, nature decided to give us sun-deprived Brits a little break, so she opened her skies and for one evening we saw up close and personal the true wonder and glory of God’s marvelous creation.

As well as the delightfully obliging weather, RAS explains that the moon was a “waxing crescent” which meant that it's light didn’t “interfere significantly with the view.”

It certainly didn’t. People from all walks of life wrapped up warm, got out in their deck chairs with a nice flask of tea by their side (an absolute must for any self-respecting Brit) and sat back to enjoy the show!

Prof. Alan Fitzsimmons of Queen's University Belfast explained that the "Comet Swift-Tuttle won't be visiting our neck of the woods again until the year 2125, but every year we get this beautiful reminder as the Earth ploughs through the debris it leaves in its orbit."

He continues "Every meteor is a speck of comet dust vaporising as it enters our atmosphere at 36 miles per second. What a glorious way to go."