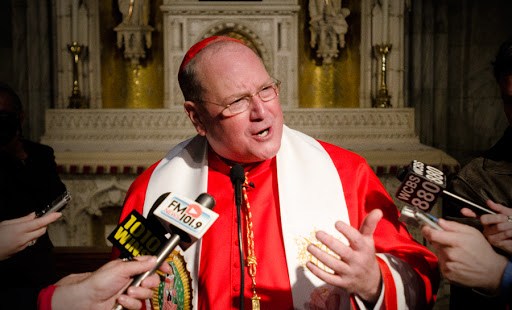 At a recent Knights of Columbus event, Cardinal Timothy M. Dolan of New York and other Church leaders warned against the tendency to “discard” society’s marginalized.

At a recent Knights of Columbus event, Cardinal Timothy M. Dolan of New York and other Church leaders warned against the tendency to “discard” society's marginalized, including immigrants.

During the Knights' 131st convention in San Antonio, Texas, Cardinal Dolan referred to Pope Francis' notion of the “globalization of indifference,” saying this can be seen in how modern society has become a “culture of throwing away.”

“We discard things, from the baby in the womb to our elders, to the immigrant, to the refugee, to the sick, to the poor, to the unemployed,” he told CNA on Aug. 6.

“It's a disposable culture,” he said, “and that's when we treat human life like trash, or like refuge.”

The cardinal reflected that the core problem of indifference is addressed by one of the most basic doctrines of the Catholic faith – the belief in the sanctity of human life and the integrity and dignity of the human person.

In his homily for the opening Mass of the Knights' annual convention, Texas Archbishop Gustavo Garcia-Siller touched on the issue by mourning the brokenness of the current immigration system in the United States.

He said that locals need to have greater solidarity with those who are “obliged to flee their own country and exist between rootlessness and integration.”

The archbishop quoted Pope Francis, warning of the dangers of the globalization of indifference, particularly towards immigrants, whose plight was like a “painful thorn in my heart.”

According to reports from the Holy See in 2012, there were roughly 16 million officially recognized refugees in the world and 28.8 million internally displaced persons. In addition, an estimated 21 million people have been trafficked, including 4.5 million for sexual exploitation and 14.2 million for what amounts to slave labor.

In his July 8 comments to the Italian island of Lampadusa – the gateway for African emigrants, many of whom are Muslim – Pope Francis echoed the words God spoke to Cain after he had killed his brother Abel, saying “Where is your brother? His blood cries out to me.”

“How many of us, myself included, have lost our bearings; we are no longer attentive to the world in which we live; we don’t care; we don’t protect what God created for everyone, and we end up unable even to care for one another!”

He lamented that the “culture of comfort,” makes us think only of ourselves, and eventually results in indifference to others.

“Indeed, it even leads to the globalization of indifference. In this globalized world, we have fallen into globalized indifference,” the Pope said in his address last month. “We have become used to the suffering of others: it doesn’t affect me; it doesn’t concern me; it’s none of my business!”

Archbishop Garcia-Siller reiterated Pope Francis' remarks, telling CNA on Aug. 7 that the “globalization of indifference makes us numb to the reality of the other.”

What we need to foster, he encouraged, is “the globalization of love.”

He reflected that having a Pope from Latin America will “bring this whole part of the world into the picture in a new way” so that many in that hemisphere, both Catholics and non-Catholics, will be exposed to the Catholic Faith and may consider to “love the Lord, and to serve him.”

“He will bring new elements to the universal Church,” said the archbishop, that are “needed for the sake of the whole church.”

Cardinal Sean P. O'Malley of Boston also addressed the “globalization of indifference” in an Aug. 7 address to the Knights, saying, “we must overcome this indifference in our own lives and help people to see that the Church’s teaching is about loving and caring for everyone.”