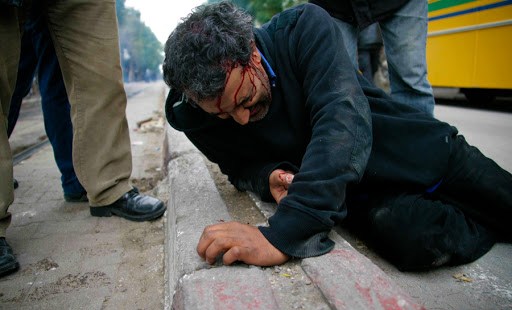 Myanmar’s reformist government has failed to tackle religious violence that has left a quarter of a million people homeless since mid-2012, many of them Muslims.

Myanmar’s reformist government has failed to tackle religious violence that has left a quarter of a million people homeless since mid-2012, many of them Muslims, a new report said today.

“The deadly wave of violence in Burma has spread beyond the Rohingya, devastating Muslim communities throughout the country,” said Bill Davies, one of the report authors and a PHR Myanmar researcher.

Anti-Muslim violence has been recorded in 28 cities and townships across the country since violence kicked off in Rakhine last year, PHR reported.

Although both majority Buddhists and Muslims have been killed and displaced as clashes have spread, Muslims have suffered the brunt of attacks while being disproportionally punished, the report added.

A video obtained by the BBC of sectarian violence in central Meiktila in April showed police officers standing by as Buddhists beat up a Muslim man, while another is left to burn in the street.

“The Burmese government has not only failed to protect vulnerable groups, but has created a dangerous culture of impunity that fuels human rights violations,” said Dr Holly Atkinson, another author of the report.

Government spokesman Ye Htut did not respond to claims made by PHR.

Aung Zaw Win, a Muslim community leader in Mandalay, accused reformist President Thein Sein’s government of double standards and failing to keep its promise to protect Muslims, an estimated four to 10 percent of the population.

“Until now, the government has just watched the situation and not attempted to solve the problem with proper methods despite the president’s promises abroad that his government would try to carry out zero tolerance [towards religious violence],” he said.

Some government critics have accused authorities, including the military, of systematic persecution of Muslims in Myanmar. But there was still no evidence to support this claim, said Yangon-based political analyst Aung Naing Oo.

“We have realized, though, that institutions are not ready for freedom in this country,” he added.

Myanmar’s failure to address anti-Muslim violence is expected to come under further scrutiny tomorrow when the United Nations special rights envoy Tomas Ojea Quintana gives his assessment of the situation at a press conference in Yangon.

His report is due to be presented to the UN General Assembly in October.