5 Things to Know About Egypt, as Churches Burn, a Mosque is Sieged and Hundreds Die 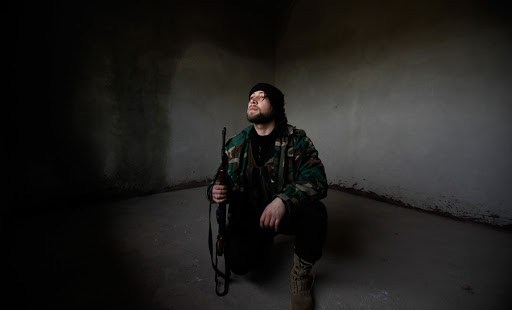 News reports suggest that last week’s violence may have left some 700 dead, more than one thousand arrested, and many more injured. Recent Pew Research studies provide insights into 5 things about Egypt that help put recent events in context.

At the same time, "scores of churches across Egypt have come under attack since the assault on the two protest camps, highlighting Egypt’s sectarian divisions and reflecting a belief among some supporters of Mr. Morsi that Egyptian Christians are in some way to blame for his ouster," reports the New York Times.

The AP photo shows the damaged interior of the Saint Moussa Church a day after it was torched in sectarian violence following the dispersal of two Cairo sit-ins of supporters of Morsi, in Minya, south of Cairo, Egypt, Thursday, Aug. 15, 2013.

News reports suggest that last week's violence may have left some 700 dead, more than one thousand arrested, and many more injured.

1. The deaths and injuries reported approach the threshold of religion-related armed conflict

The June 2013 Pew Research study on religious restrictions and hostilities had already counted the violence during and after the Arab Spring uprisings of 2011 in Egypt as religion-related armed conflict. If recent reports of deaths and injuries are accurate, the conflict pitting the security forces against supporters of ousted Islamist president Mohammed Morsi approach the threshold of religion-related armed conflict used in the Pew Research study.

According to the study, religion-related war is defined as "armed conflict (involving sustained casualties over time or more than 1,000 battle deaths) in which religious rhetoric is commonly employed to justify the use of force, or in which one or more of the combatants primarily identifies itself or the opposing side by religion."

2. Government restrictions on religion in Egypt are associated with higher levels of social hostilities

A study by the Pew Research Center finds that – on average – social hostilities involving religion are 3.5 times higher in countries with very high government favoritism of religion than in countries with low levels of favoritism (click on chart). And, when more than 200 people are affected by government force toward religion, this coincides with 4.7 times higher levels of social hostilities involving religion. The violence this past week appears to have have crossed that threshold.

Although the government of ousted Islamist president, Mohammed Morsi, made moves to favor Islam more highly than before, government favoritism of Islam in Egypt was already very high. For instance, the government prohibits – and has prohibited – Muslims from converting to any other religion, and Islamic law was already enshrined in the constitution as a source of legislation for the country long before Morsi came to power.

3. Sectarian violence – as occurs in Egypt – is strongly associated with high government restrictions

Sectarian violence in Egypt is not a new phenomenon, but it appears to be on the rise. For instance, prior to last week's violence, Al-Jazeera reported that confrontations between Muslims and Copts have increased in Egypt since the overthrow of Hosni Mubarak in 2011. And Amnesty International reported on a recent increase in tensions in Wasta (about one hundred kilometers south of Cairo), highlighting the vulnerability of Egypt’s Coptic Christians, the largest religious minority in the country.

The violence by and toward the Muslim Brotherhood, however, is also a form of communal violence within the Muslim population, pitting those supporting a more Islamist approach against other Muslims in the country.

Among the various forms of social hostilities involving religion, sectarian or communal violence between religious groups has the strongest association with government restrictions on religion. The average level of government restrictions among the countries with sectarian violence (GRI = 5.0) is much higher than among countries without such violence (2.4), as shown in the chart (click to enlarge).

See my TEDx Talk for more on the association between government restrictions and social hostilities.

4. Egypt's Christian population, while the largest in the Middle East, may be smaller than often reported

No nation in the Middle East-North Africa region has a larger Christian community than Egypt. Though media reports sometimes suggest that Christians make up 10% or more of Egypt’s population of approximately 80 million people, census and survey data analyzed for a recent Pew Research report indicate that Egypt’s Christian population is about half that size. The study finds that there are 4.3 million Christians in Egypt — more than in Lebanon, Saudi Arabia and Syria combined. Nine-in-ten Egyptian Christians are Orthodox Christian. Most Christians in Egypt belong to the Coptic Orthodox Church, which is an Oriental Orthodox church. (See Defining Christian Traditions.)

Census and demographic survey data suggest that the Christian share of Egypt’s total population has been declining. The highest share reported in the past century was in 1927, when the census found that 8.3% of Egyptians were Christian. In each of the eight subsequent censuses, the Christian share of the population gradually shrank. The most recent census, in 2006, found that about 5% of the population was Christian. The Pew Forum’s 2011 report on the global Muslim population estimated that approximately 95% of Egyptians were Muslim in 2010.

Although Egypt’s Christian population is overwhelmingly Orthodox, other Christian denominations and movements have a significant presence in the country. For example, there are an estimated 140,000 Egyptian Catholics and more than 250,000 Egyptian Protestants. Evangelical, pentecostal and charismatic movements have influenced Protestantism in Egypt, leading, for example, to the formation of the Coptic Evangelical Organization for Social Services, founded by evangelical layman Samuel Habib in 1950 to promote community development.

5. Egypt stands out among Muslim-majority countries as having low tolerance of religious pluralism

While Egypt is home to some of the most intense government restrictions on religion, these restrictions are coupled with a Muslim public that is considerably less tolerant of religious pluralism than Muslims elsewhere, according to a recent Pew Research analysis.

The analysis of public opinion polling conducted in Egypt in November-December 2011 shows that many Egyptian Muslims recognize the lack of religious freedom in their society. The analysis noted the following:

Originally published by the Weekly Number on 19 August 2013.