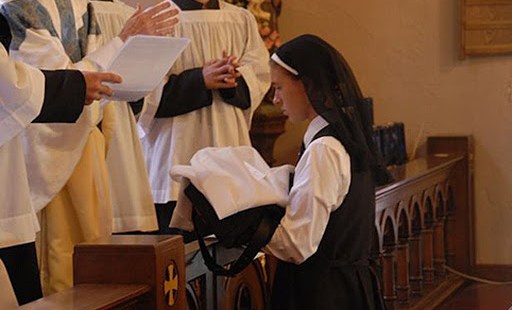 On the recent feast of the Assumption, a young U.S. woman became a novice with a traditional religious order after she saw their devotion to Mary and counter-cultural witness to Christ.

On the recent feast of the Assumption, a young U.S. woman became a novice with a traditional religious order after she saw their devotion to Mary and counter-cultural witness to Christ.

Taking the name Sister Marie-Celine, Erin Kelly joined the Slaves of the Immaculate Heart of Mary, an order in Massachusetts that focuses on Marian devotion according to Saint Louis de Montfort.

“The sisters and brothers were the ones, by their teaching and example, with the help of God’s grace, who inspired me to try the religious life,” Sr. Marie-Celine told CNA Aug. 17.

“Seeing religious in full habits, living a life so contrary to today’s world – a life of dedication to God and His work, of selfless love – is such a beautiful and refreshing thing unknown to most. I wanted to be a part of that.”

The Slaves of the Immaculate Heart are a community of religious brothers and sisters for whom the writings of St. Louis de Montfort, especially “True Devotion to Mary,” make “up the essence of life,” Sr. Marie-Bernard, a professed Sister in the community, told CNA.

“We renew the consecration daily, and the 33 days of readings for Total Consecration yearly,” she explained.

“Everything about ourselves and our work is given to Jesus through Mary – in all we do, our life is a prayer.”

Sr. Marie-Celine reflected on God's call in her life, saying that while she had “considered the possibility of dedicating my life to God” throughout high school, she “quickly became involved in the world after graduating” and slowly started to “drown out the idea of religious life.”

She “greatly enjoyed work and travel,” “the power of independence,” and “the fun I was having.”
Yet, she explained, “in the midst of my worldly experience, a solitary thought constantly pricked my mind which I could not evade – 'what am I doing with my life?'”

“Aside from learning life lessons, I was wasting time. I wasn’t satisfied with the superficial happiness and unrest the world gave me, and the idea of a vocation started to resurface.”

Sr. Marie-Celine started to look into different convents across the country, but realized that “what I was looking for had been right in front of me – a community living a life of total consecration to Jesus through Mary.”

She had attended first through twelfth grade at the the order's Immaculate Heart of Mary School, and said that “I firmly believe that it was divine providence which placed me in their care.”

Reflecting on her formation by the community, Sr. Marie-Celine said that “in their daily actions … I saw their work was not merely routine – it was supernaturalized. They were doing things for God alone.”

“That is what I lacked in the world, a supernatural motive, a striving for eternal life with God.”

Sr. Marie-Celine's profession as a novice on Aug. 15 followed her completion of a six-month postulancy. She will be a novice for two years before taking temporary vows, which last three years. At that time, she will be able to make final profession with the community.

During the Mass of Profession, the Slaves of the Immaculate Heart also received a new postulant, Clair Sonnier, who was “drawn to the Slaves because of their traditional religious life,” and their devotion to the Traditional Latin Mass.

Sonnier became familiar with the community through one of their apostolates, a summer camp for girls. The profession was received on the feast of the Assumption because of the community's Marian focus.

Sr. Marie-Bernard explained that it was selected “because it was the fulfillment of the Blessed Virgin Mary's life,” being re-united with Christ body and soul in heaven – “something we all desire, especially as consecrated religious (and) Brides of Christ.”

Along with Marian devotion in the tradition of St. Louis de Montfort's consecration, the Slaves of the Immaculate Heart are devoted to the extraordinary form of the Roman Rite – the Mass as it was celebrated in 1962, prior to the Second Vatican Council.

The extraordinary form Mass is the “pulse” of the community's life and apostolates, “with its beautiful richness in tradition and liturgy,” Sr. Marie-Bernard explained. She cited the “reverence and sacredness” of its prayer and rites as something that “draws souls to Christ,” which is “what our world needs now, more than ever.”

The spirituality of the Traditional Latin Mass forms the community's charism for evangelization. Sr. Marie-Bernard said “the Slaves' main purpose and goal is to bring souls to Jesus through Mary, evangelizing through their publications, school, catechism classes and summer youth programs.”

The community of sisters includes 14 professed, two novices, and one postulant. There are four professed brothers, and one novice. Members add a fourth vow, to promote the doctrine of the Church, to the traditional religious vows of poverty, chastity and obedience.

The community is a re-founding of an order originally founded by Fr. Leonard Feeney. In 1976 Brother Hugh MacIsaac re-founded the community, located in the Diocese of Worcester.

In 2002, Bishop Daniel P. Reilly, then the Bishop of Worcester, “regularized” the community in his diocese, and his successor, Bishop Robert J. McManus, has on three occasions celebrated confirmations at the chapel of the Slaves of the Immaculate Heart.

Sr. Marie-Celine recounted that since having joined the community six months ago, she has experienced the peace that Christ promised his disciples during his farewell discourse in the Gospel of John.

“Leaving the world was like a weight being lifted off my shoulders. Having the privilege of daily (Traditional) Latin Mass, availability of the Sacraments, and the companionship of the community as a religious, has been the greatest grace of my life.”

While saying she “wouldn't do it justice” were she to try to relate her interior feelings about her vocation, she said the following quote from St. Augustine's “Confessions” “beautifully gathers the sentiments I find hard to express.”

“You have made us for yourself, O Lord, and our heart is restless until it rests in you.”