Tagle Takes Another Swipe at Corruption 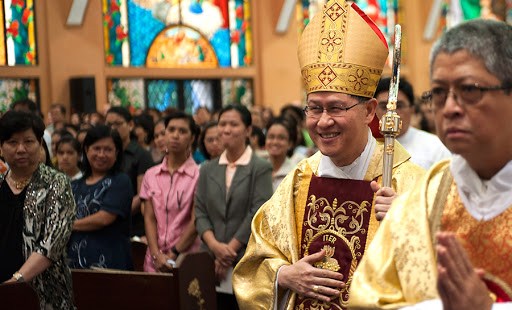 Cardinal Tagle calls on Filipinos to shun greediness and live a life of simplicity, saying that abundance for some may cause hunger for those less fortunate.

Manila Archbishop Cardinal Luis Antonio Tagle has called on Filipinos to shun greediness and live a life of simplicity, saying that abundance for some may cause hunger for those less fortunate.

“We have to lead a life that is not characterized by lavishness, but instead by adequateness that allows us to live simply and properly,” the prelate said on Saturday during the launch of an ecological campaign called the “Season of Creation” running from September 1 to October 6.

"Look at the crisis we are experiencing now. The arrogance of those who claim what is not theirs is appalling," Tagle said, referring to recent corruption scandals involving top officials and legislators.

"Do not fear, for those who show great arrogance lose everything. They will be forced to accept the fact that they do not own anything," Tagle said.

"Our time now calls for humility, and those who live in greedy abundance greatly affect the common good," he said.

He also urged people to live simple and contented lives and share their blessings with others.

Despite Tagle's launching scathing criticisms of those in power, the Manila prelate continues to enjoy the support of various sectors of Philippine society.

At a gathering of businessmen and professionals last week in Makati City, Manila’s financial district, Tagle was described as a "rock star" as people swarmed around him for photographs and autographs.

He got the same reception from protesters during last week's "Million People March," against corrupt abuses in the Priority Development Assistance Fund.

At the start of the Season of Creation campaign on Saturday, Tagle also urged people to take a more active role in protecting the environment.

Known in other countries as "Creation Time," the campaign focuses on theological discussions and worship directed toward the theme of God’s relationship with creation.

Activities also aim to heighten public awareness on the state of the environment and the role of people in taking care of it.

"We have to be reminded that we are mere stewards of creation…. Because of this, we have to discern and scrutinize His will over His creation," the prelate said.