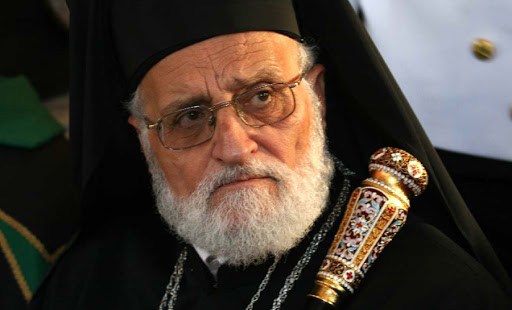 Patriarch Gregorios III gives a “No” to foreign military intervention

The leader of the Melkite Greek Catholic Church has argued that despite reported chemical attacks in Syria, foreign military intervention is a destructive option that will only worsen the situation.

“I am adding my voice to all the statements made by most of my brother Eastern Patriarchs, several Episcopal Conferences, the Archbishop of Canterbury, and especially His Holiness Pope Francis and his representative at the United Nations in Geneva,” said Melkite Patriarch Gregorios III in an Aug. 30 statement.

Patriarch Gregorios III, a native-born Syrian, is the president of the Assembly of the Catholic Hierarchy in Syria, as well as patriarch of the Melkite Greek Catholic Church, an Eastern Church in full communion with Rome.

His comments come amid escalating tension in Syria, which has been embroiled for more than two years in a violent civil war between government forces under President Bashar al-Assad and various rebel groups.

In late August, reports surfaced that chemical weapons had been used outside Damascus, killing more than 1,400 people.

United States officials say that are confident that the Assad regime is responsible for the use of the weapons, although the regime has denied responsibility and blamed the rebels for the attack. Citing violations of human rights and international norms, U.S. President Barack Obama said on Sept. 1 that he is asking Congress to approve military action against Syria.

Patriarch Gregorios III said that even in the wake of continued violence and reported use of chemical weapons, his “conviction is still sure: no victory through weapons and violence.”

Focusing on “defining the responsibility of this or that side for tragedies, massacres and the use of chemical weapons, though legitimate, is secondary” to reaching a peaceful solution, he stressed.

He explained that violence “leads to violence and weapons to other weapons. The parties to the conflict will continue to fight to the bitter end, as they all have an abundance of weapons.”

“The tragic situation that Syria has been experiencing for the last two and a half years is the strongest evidence of the primary importance of seeking the earliest possible peaceful, diplomatic resolution of the crisis,” the patriarch emphasized, arguing that global involvement has only caused the conflict to escalate.

Over the past two and a half years, he said, “Eastern and Western countries have not stopped sending weapons, money, military experts, secret service agents and Salafist fundamentalist armed gangs of thugs and criminals” to Syria. These forces, he charged, have been “far more dangerous even than destructive chemical weapons.”

Encouraged by outside forces, the patriarch said, these factors have contributed to death, displacement and destruction, “not to mention the wrecking of both infrastructure and institutions.”

They have also led to “rape, extortion of ransom, robberies, assaults on civilians, hatred, enmity, revenge, exacerbation of ethnic and religious conflicts,” he said.

In the face of growing troubles, Patriarch Gregorios III still hopes for “a unanimous, global campaign to be orchestrated to prepare seriously and carefully” for the proposed United Nations-backed Geneva II Middle East Peace Conference that has been tentatively suggested for later this year.

“Contrary to the calls to arms, attacks and military interventions,” he said, “we enjoy listening to appeals from around the world aimed at creating an atmosphere of reconciliation, dialogue, humanitarian solidarity, hope, forgiveness and finally peace.”

In the meantime, the patriarch said, Melkite Catholics “are launching a campaign of prayer in our churches, homes, youth movements and confraternities.”

He added that they “join in the calls for prayer that have been launched around the world for peace in Syria, as that is the real movement for solidarity with Syria.”

Among other calls for peace in the region, Pope Francis has announced a global day of prayer and fasting for peace in the world and particularly in Syria on Sept. 7. He will lead a prayer vigil in St. Peter’s Square that evening and is asking people of all faith backgrounds to participate locally “in whatever way they can.”