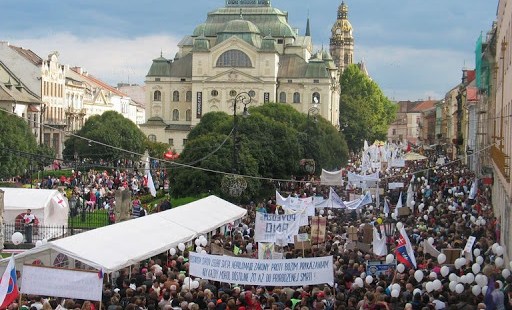 Košice town, Slovakia, stunned Europe on Sunday with the sheer magnitude and beauty of its first-ever National March For Life.

On the same weekend as the Gay Pride March in Bratislava, which gathered around 1,000 participants, over 80,000 people came together in Košice to give a big “thumbs up” to the dignity of life.

The event was a spectacular success; streets were filled to the brim with joyous folks from all walks of life. There was music, prayer, prominent people offering talks and testimonies on stage and most of all there was one untied voice singing out for the world to hear: “Yes to life!”

The official MC for the event Tomáš Kováčik told Aleteia that “the atmosphere was very calm, friendly and peaceful. People were always smiling even though it was so crowded. They were happy to stand there for these values, they knew it was important to come out and tell society that these values need to be taken into account.”

He continues: “The main idea of the Slovakian National March For Life was to stand up for values of the protection of human life for each human being from conception to natural death, and to stand up for family and the state of marriage as one man and one woman, which is the best place for the next generation of children to grow up in.”

The event’s official manifesto made the call to all people of good will, politicians, parliament, the Slovak government and state institutions “to create the legislative conditions to protect human life from conception until its natural death and the marriage of one man to one woman.”

“We are fighting for values of life and family in a peaceful way” says Kováčik.

At the end of the march thousands of balloons were unleashed into the skies, as a symbolic tribute to the unborn and to the victims of abortion.

16 bishops celebrated masses on the Saturday night in Košice, which was followed by a live concert for the unborn and a night vigil with the Blessed Sacrament. During the march itself, the tumultuous crowds proudly displayed a 500 metre long banner with the words of Evangelium Vitae.

Partners of the event donated a strikingly beautiful statue of a mother on her knees with her aborted child made out of a translucent material, gently forgiving her.

One lady, Margita, a 53 year old nurse and mother of three, was there with her whole family. She told Aleteia that this March for Life was “the greatest civil demonstration in Slovakia since the fall of communism in 1989.“

“The atmosphere was extraordinary” she continued, “there were masses in the churches of Kosice celebrated by Slovakian bishops, youth, families with children in their arms, on shoulders or in pushchairs, middle aged and older people, priests, religious and laity. There were pro-life slogans, balloons, t-shirts, songs of the young people, applauses and chants.”

“The event represented the defence of the culture of life in this year’s official European city of culture: how meaningful and inspiring” she exclaimed.

Miroslav Mikolášik, a member of the European Parliament, who was also in attendance at the momentous march, speaks to Aleteia about the day:

“We were all shocked at the sheer magnitude of the March for Life” says Mikolášik. “There was a great atmosphere with music, messages and testimonies from the stage, and then the march itself didn’t seem to end because there were so many people filling the streets.”

He continues: “Pro-life organisations, priests and activists, and people of good will decided to come and show the value of human life and the natural family composed of man and woman and also the right of parents to educate their children according to their convictions” says Mikolášik.

“It is something that has to be shown to the leaders of our country and also of Europe” he adds.

“Being the father of four children and being a medical doctor, knowing how life begins and ends, and being a member of European Parliament (EP), and co-chair of the intergroup for Bioethics within the EP, I feel that I had to be here with other people and to show my support.“

Mikolášik also tells Aleteia of how touched he was by the presence and personal testimony of the rector from Saint Elizabeth's University in Bratislava, Vladimír Krčméry, who came and spoke on stage at the march. Krčméry is a researcher and medical doctor and is working for the promotion of the protection of life from the moment of conception.  “So it means that academic people are also joining our movement,” says an enthusiastic Mikolášik.

“Consequently I think that legislators in Slovakia will be challenged at such a march” he adds.

“I am overwhelmed by the joy and encouragement that particularly the young people gave me,” he says. “It is another reason to struggle and to stand up for my convictions.”

Mr Mikolášik also explained how they are not alone in their defence of the dignity of life. He told Aleteia about initiatives also taking place at the European level.

“Recently in October 2011, in the highest possible European Court of Justice in Luxembourg there was the trial of Oliver Brüstle v Greenpeace, concerning the usage of human embryonic stems cells, where the human embryo is destroyed.”

The court ruled that an invention is excluded from being patented where the process requires either the prior destruction of human embryos or their use as a base material. Mikolášik explains that in this decision “the Court of justice of Luxembourg stated clearly that human life begins at the moment of conception and that…such a human being, where life has already begun, has a human dignity.”

He also draws our attention to the magnitude of the pro-life voice of people around Europe, which is evident through the initiative called One of Us.

Mikolášik says that they have collected more than one million signatures, “which is already sufficient in number to put into debate, in the European union, the issue of using tax payers money to support research on embryos and to destroy embryos during this research in order to collect stem cells.”

So the pro-life voice is gathering momentum in Europe and becoming so strong that legislators can no longer ignore it and this latest March by the Slovakian people is testimony to this.

Kováčik, the event’s MC, told Aleteia that the message they wish to transmit is “to peacefully tell the world that the protection of human life, regardless of race, colour or creed, is one of the highest possible values in society, and that leaders should make sure these values are reflected in both the laws and the functioning of our societies.”

Finally the Pope himself gave a brief message through his annunciate Mario Giordana: “don’t ever be discouraged to defend the culture of life.”

Indeed Slovakia this weekend was a fine example of standing up tall and proud for the culture of life. They are a truly great encouragement for the other countries of Europe to defend the dignity and sanctity of life in the face of a culture of death.