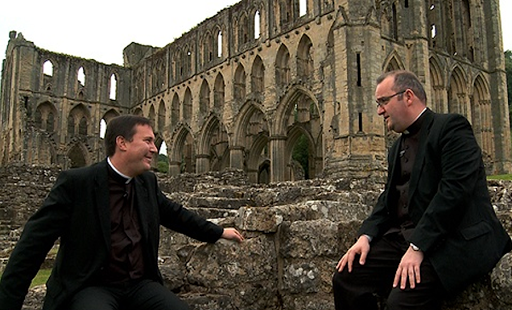 The martyrs teach us primarily to be true to the principles of our faith, says English priest.

The new film “Faith of Our Fathers” examines the Catholic martyrs of the English Reformation, whose fortitude is a reminder that persecution strengthens the Church, a presenter of the film has noted.

“I think perhaps the heroism and strength of Catholicism through that period, when we were given so many saints, martyrs and heroes, wouldn't have happened without the persecution,” said Fr. Marcus Holden, a priest of the Archdiocese of Southwark who was involved in the making of the documentary.

“And maybe that is providence.”

The two-hour film serves as a fit reminder of God's providence through human history, full of sin and seemingly lost opportunities.

While the English Reformation “might have been reversed” at various points in its course, “we can't second guess what God is doing,” Fr. Holden reflected. “That's the same with every situation in history.”

For some 150 years, from 1535 to 1679, hundreds of Catholics in England and Wales were martyred for the faith. In the documentary, Fr. Holden and Fr. Nicholas Schofield, a historian and priest of the Archdiocese of Westminster, travel throughout England visiting locations associated with these martyrs.

These include monasteries destroyed by Henry VIII; a seminary on the site of St. Thomas More's home; a manor house which is home to a printing press used by St. Edmund Campion; the shrine of Our Lady of Ladyewell; Tyburn, the site in London where many martyrdoms were carried out; and several homes with priest holes and secret altars.

The film also features interviews with Bishop Terence Brain of Salford, and Archbishop Vincent Nichols of Westminster, who discusses his devotion to St. John Fisher, the only martyr-bishop of the English Reformation.

“Faith of our Fathers: in search of the English martyrs” is produced by and available from Saint Anthony Communications on DVD, in multi-region format that can be played on both US and UK players.

Fr. Holden described the documentary as “a personal search … I was looking to understand something of my own background, what it means to be English and Catholic.”

“It's quite a personal search in some ways … and it's a sort of exploration. We feel that the viewer is travelling with us.” He said that while there were scripts for the film, “we at certain moments speak quite openly of how we feel in places, and our reaction to seeing some of these sights that we'd never been to before.”

He added that the scenes are “very evocative, and the camera comes with us, and the viewer kind of feels that he's on the same journey, as well.”

Fr. Holden said the reasons for his involvement with the film were threefold: the inspirational quality of the English martyrs, the fact that they have been a bit forgotten of late; and the recognition that “we are in a period of challenge today, with secularism particularly in this country, and the martyrs faced a very particular challenge in their time.”

He added that the English martyrs are inspirational for their “great charity to those around them; they never let the persecution lead to a sort of hatred. They always loved their country, and they loved those around them.”

“They are, quite, I suppose you'd say today, entrepreneurial: they were willing to adapt to the particular situation in which they lived, and do the best they could to evangelize, to be a witness to Christ in that situation.”

“We see the martyrs … finding ways to share their faith, to keep their faith alive, in ever changing circumstances, and I think that's a really interesting point, because today things are changing so quickly … and we have to be very innovative, and adapting, while remaining true to those principles of faith.”

These martyrs were much better known in the late 20th century in Britain, due to mass canonizations and beatifications. In 1970, Pope Paul VI canonized 40 English and Welsh martyrs, and Pope John Paul II beatified another 85 in 1987.

Since then, however, interest in the martyrs seems to have waned. “We certainly felt it was time to re-tell the story,” reflected Fr. Holden, cautioning that a new generation is being raised “who would know nothing of the martyrs … so we thought this was really important to help revive interest once again.”

The English persecution of Catholics “is a two-century long event,” Fr. Holden explained, and English “society even today, is affected by that history … because Catholicism was an underground religion for two and a half centuries.”

“The kind of heroism that's needed for generation after generation of families to maintain the faith, with fines, with estrangement from society, for some with execution,” he reflected, is quite an impressive story.

Returning to the theme of providence, Fr. Holden said that it was “very much in the mind of the martyrs that they were laying down their lives, not simply to be united to Christ in Heaven, not simply as a personal witness to the faith, but for the future of Christianity, of Catholicism, for the revival of it in this land.”

“So they very much were praying for the conversion of England, and when (Blessed John Henry) Newman converted to Catholicism … he attributed the 'second spring', the revival of Catholicism in the 19th century, to the blood of the martyrs of the Reformation period.”

Originally published at Catholic News Agency on 13 October 2013. Used with permission. All other rights reserved.