Why Harry Potter Is Great Literature 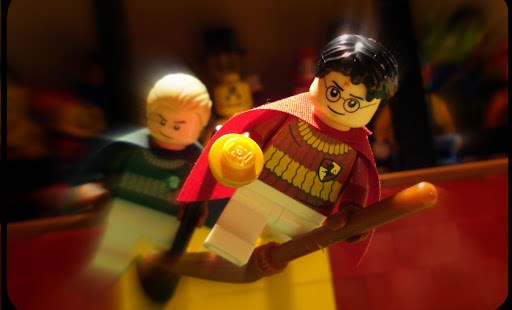 In which I risk all my friendships with people who read

I enjoy spending time with people who appreciate great literature. The number of my friends who are intimate with Dante or Tolkien or Austen is, as Oscar Wilde would say with a wink, “considerably above the proper average that statistics have laid down for our guidance.” My book-loving church regularly ships in world-class English professors to give lectures and field the usual round of questions about Peter Jackson’s interpretation of Aragorn and Faramir.

And I’ve noticed that in these circles, it’s often a faux pas to admit that I, like nearly every other Millennial in America, own extremely well-loved copies of all seven Harry Potter books. And I would lose all credibility with many of these people if I suggested offhand that I think the Potter books are in the tradition of the great English novels, deserve to be mentioned in the same sentence, and are easily the most morally and socially insightful works of fantasy published in this generation.

But I do think that. And I think I’m justified. So I’ve decided to step forward and offer a defense, on behalf of everyone who instinctively agrees with me and has better things to do than figure out why.

Any book worth reading can’t have its value fully explained in a bullet point or two. After I wrote my “Why Men Like Jane Austen” post a couple years ago, I proceeded to spend several months researching and outlining an entire book by the same title (currently gathering digital dust; apparently in real life you have to feed your family, not just “follow your dreams”). J.K. Rowling’s work is no different, and in the interest of staying on point I’ll gloss over many praiseworthy elements of her books like intricate plots, rich imaginary worlds, clever social satire, superb characters, and a roll-on-the-floor sense of humor.

Instead, I’ll focus on two things: how Rowling engages the larger tradition of English literature and specifically fantasy; and how she brings that tradition to bear in a way that sheds light on our time and human nature. Or, in the language of the normal people for whom she writes: I’ll focus on why I, and millions like me, will be giving these books to my children and grandchildren.

Rowling and the Fantasy Tradition

Fantasy appeals to us, to put it crudely, because of the relationship between magic and morality. An alternate world filled with strange and wonderful things, a world defined by imagination, gives us a setting in which to (consciously or not) engage with moral questions free from the complications and biases with which we engage our own setting. This can be blindingly obvious, as with Lewis’s explicitly allegorical Narnia, or more subtle, as with Tolkien’s stubbornly not allegorical Middle Earth. Fantasy, mythology, and fairy tales allow an author to shape our unconscious ideas about what our own world should be like—without beating us over the head with them or even stating them outright. Fantasy stories can tell you a lot about what a civilization values, and the best fantasy stories help a civilization value the right things.

The Millennial generation (born 1982-2003ish) is dealing with a real world increasingly bereft of the healthy families, relationships, and institutions that gave previous generations a framework for considering moral questions. It’s also increasingly bereft of the framework people used to have for knowing who they were. Today’s kids are told that all the answers can be found within; that they can achieve anything they want if they just follow their passions. It’s been called the litany of expressive individualism. The further past college they get, the less true they suspect it is. But they’ve been shown no alternative.

Very few things allow a teenage reader to grapple with growing up in precisely this situation. Rowling was a single mom when she started writing. And in Harry Potter, a modern teenager can watch a boy struggle with the same things he does, and see precisely what ultimately distinguishes the boy from the man he becomes–namely, things that would terrify the benevolent technocrats and progressive-minded individuals who shaped the second half of the 20th century.

Norman Lebrecht thinks Potter is about a subtle form of teenage rebellion against the adult world, and in a way this is true—but not the adult world as such; rather, the specific adult world Harry’s generation will inherit. Rowling offers the rare fantasy that gives a young reader a vastly different look at the well-lived life than he is getting from his high school, college, and too often, parents. Yet she doesn’t tell the reader to question everything; far from it. In the true fantasy tradition, she helps him build a picture of the things that are worth clinging to when everything else is being questioned.

As a result, the most powerful themes of the Harry Potter books are about identity—and they are profoundly countercultural.

The Ones that Really Matter

In The Lord of the Rings, Sam Gamgee speaks nostalgically about the great stories, “the ones that really mattered.” More than anything else, Rowling’s idea of what really matters is what made millions of children (and adults) who weren’t readers blaze through her books in a single sitting. It wasn’t just that her idea of what really matters felt right; it was that it was in such stark contrast to so many things about our world that felt wrong. Like starving people, we couldn’t get enough of it.

There’s an obvious theme of unconditional love that runs throughout the Potter books that is beautiful and comforting amidst divorces and frequent relocations. But beyond the obvious, whether they can articulate it or not, Potter fans know that there are things much more important than their “passions” in shaping identity. A few of the more central:

Our choices. It is these, mentor Dumbledore tells an insecure Harry, that show who we truly are. No Aladdin-style “his worth lies far within” nonsense here. Over and over in Harry Potter, good triumphs when somebody who has no business being a hero–dim-witted Neville Longbottom, dumpy mother of seven Mrs. Weasley, most of all Harry–makes a choice to be stupid, to “fight the unbeatable foe,” just because it’s the right thing to do.

Our loyalties. Harry’s fierce loyalty to his friends leads him to make a good many of these “stupid” decisions, standing by those who need him even when it costs him dearly; because few advantages are worth gaining at the price of a strong relationship. And he learns quickly to distinguish between power (represented by the evil Voldemort and even the wizards’ “good” bureaucratic administrative state) and authority (represented by wise men and women, and most of all by Hogwarts—a place that remembers its roots, lets the little platoons work, and is defined by traditions that are never more respected than when they seem silly and quaint).

Place. And more specifically, to use James Howard Kunstler’s phrase, “places worth caring about.” Harry grows up in a cookie-cutter suburb with a cookie-cutter Millennial cousin; no sense of place, no beauty, no community. From there, he is transported to Hogwarts, a beautiful castle that represents a golden past that he has never known; a world that existed before him and will, if he can help it, survive him. Harry grows up in part through a process of developing a home and responsibilities to it. Most Millennials I’ve talked to agree that they feel more homesick for Hogwarts than any real place they’ve lived in their lives, and “It’s like Hogwarts!” is a universal point of reference when they encounter a place with beauty and history and identity.

Prudence. It has been said that politics is the art of the possible. But in 21st century American political culture, compromise and winnable victories are seen as a kind of treason; a sacrifice of purity. We may criticize elected officials for threatening to blow up the world (so to speak) in the vain hope of winning a total victory, but many would deride them as unprincipled if they didn’t. Harry, on the other hand, is taught that “The world isn’t divided into good people and Death Eaters (the bad guys);” and that maturity means learning to work with people you don’t like, bite your tongue when no good can come of speaking, and discern the difference between unpleasantness and true evil. One of Harry’s finest moments comes in the last book, when he nearly dies in order to rescue a schoolfellow he loathes.

Family. If Harry were a Disney character, he would either abandon his family to chase his dream, or the fact that he’s mysteriously missing at least one parent would be irrelevant to him. But in Rowling’s world, orphan Harry wants nothing more than a family—in fact, in a reversal of the Millennial moral imagination, when he’s unofficially adopted by one, he’s willing to sacrifice everything else to protect it. Over and over, it’s shown how much of Harry’s character came from the influence of his real parents. And on top of it all, Rowling’s idea of a happy ending is to show us that, 19 years later, the heroes are all married with a bucketload of kids, nothing more.

In short, Rowling (who must clearly be seen as a danger to modern society) seems to think that children find—make, really—their place in the adult world by the strength of their character, by the structures of their connections with the past and with loved ones, and not by “finding themselves.”

Tellingly, Harry never finds a passion in life, nor does he ever have much of an idea of what he wants to do with his life. The very thing most kids today are told to seek—Harry never finds it or even seriously looks for it. He doesn’t need to. Best of all, in almost Austenian fashion, Rowling sets these stories in a school, where parallels with Harry’s day-to-day battles with classmates and teachers make clear that all the virtues that make good triumph over evil are the same virtues that make the difference in real life.

Harry Potter’s is a reactionary world, a real step back in the march of progress. Families and traditional institutions are central, government experts are viewed with distrust, and the celebrity hero doesn’t want to be a celebrity. And likewise unfashionable is the path by which Harry and his friends seek adulthood. They find meaning in responsibility, learn respect for rightful authority, and sacrifice their individuality and even their lives to preserve a very messy world that seems beyond saving.

Yet Rowling, it seems, was right to think that this was precisely the message that would appeal to today’s rudderless youth. They loved the story of an angst-filled boy who found meaning in all the right places, and triumphed. Whether they realized it or not while they were reading, Rowling was helping them understand their own world better; not just as it is, but as it ought to be.

This is what great fantasy does. It speaks to a time and place with truths that are timeless. And I’m pretty sure nobody living has done this more effectively than J.K. Rowling.