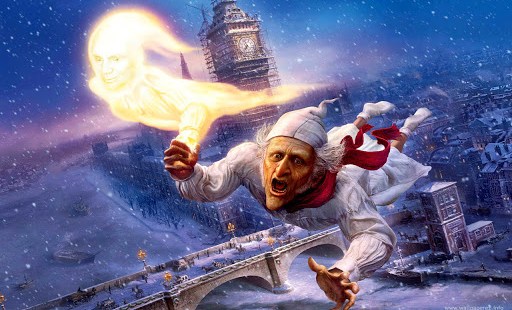 We, too, should live in the past, present, and future to stay aware of our weakness and repent of our sins, and we have His spirits—the angels and saints—to be our guides along the way.

I cannot recall a time when I didn't know the story of A Christmas Carol. The images and themes have delighted or haunted me since my childhood, either in the form of the "Dickens Village" adventure at the mall or the hundredth or so viewing of the Muppet version. (Michael Caine, you will always be my Scrooge.) So when I studied Dante's Commedia in college, it was no leap for me to recognize the countless similarities between the two stories. I would write C.C. in the margin every time I came across another bit of Dickens in Dante. At long last, I can pitch some these ideas to the wider world.

There's no known proof that Dickens was familiar with The Divine Comedy; but there is one historical fact that I recently found which may point to a direct link. Since I knew that my dear G.K. Chesterton had tremendous admiration and affection for Charles Dickens, I thought I ought to finally read some of his essays on the subject. His own "Introduction" (1922) to A Christmas Carol along with "Dickens and Christmas"(1906) are very interesting and filled with little witticisms and paradoxes that cheered me right up (after looking at the above faces). The bit that most intrigued me is Chesterton's claim that Dickens actually wrote his Carol while he was touring Italy. I imagine that although Dickens may not have actually read an English translation of the Comedy he quite possibly encountered the story or at least the spirit of the story in the art and culture that surrounded him as he wrote. Chesterton describes what it must have been like for Dickens to explore in such a foreign land, suggesting that his mind never left England behind for a moment. Thus, he never really understood the roots of the Italian experience: "the Roman legend, the ancient life of the Mediterranean, the world-old civilisation of the vine and olive, the mystery of the immutable Church." However, as Chesterton points out, Dickens seems to have intuited some of these things nonetheless:

"Dickens had in his buffoonery and bravery the spirit of the Middle Ages. He was much more medieval in his attacks on medievalism than they were in their defenses of it. […] He could only see all that was bad in medievalism. But he fought for all that was good in it. And he was all the more really in sympathy with the old strength and simplicity because he only knew that it was good and did not know that it was old."

It is this spirit that permeates A Christmas Carol. It acts like a Medieval morality play because it is one. Here I will juxtapose the Carol and the Comedy in order to illustrate some of these ideas.

First of all, both main characters begin in a dark wood—vividly illustrated as such in the Comedy and similarly rendered in chimney tops, alleyways, and dense fog in the Carol. The Pilgrim and the Miser have lost their way. Hence, they are taken on a mystical journey for the sake of their reclamation: Dante through Hell, Purgatory, & Heaven; Scrooge through the Past, Present, and Future. The three beasts that Dante meets before his journey begins (leopard, lion, and wolf) function similarly to the omens that Scrooge encounters on Christmas Eve: the hearse, the transformed door-knocker, the ringing bell. And when Dante first meets Virgil, the lines run,

"And when I saw him standing in this wasteland,
"Have pity on my soul," I cried to him,
"whichever you are, shade or living man!"
"No longer living man, though once I was," […]"