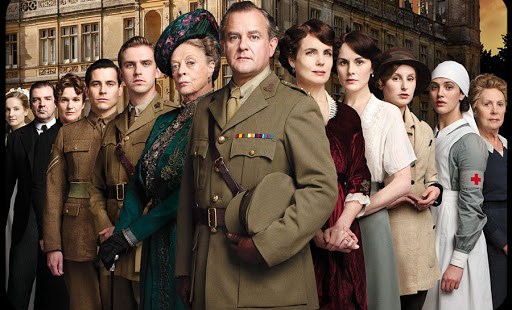 What has NY Times columnist Maureen Dowd got against Downton Abbey?

It’s easy to sneer at melodrama as though it’s nothing more than Snidely Whiplash tying Sweet Nell to the railroad tracks. But we cannot forget that it’s as essential to the human spirit as bread is to our stomachs. Consider:

Two gold-hearted servants of an English lord fall in love. The man, however, is married, and his wife will not grant him a divorce. But then the wife is murdered in mysterious circumstances, and the husband is accused of the crime. He’s sent to jail, but back at the manor, his heart’s true love is as constant as a brick, working every angle to prove her lover’s innocence. Ultimately, she succeeds, the man walks free, and the gold-hearted lovers are united in marriage and live happily ever after. Or until the next season of episodes.

This is melodrama. It differs from drama taken neat in that melodrama spares no expense in getting audience emotions to spin around its conflicts at maximum torque. Lovers need to be kept apart until the third-act climax. How exciting if one of them is behind bars and facing the hangman’s noose.

Why is melodrama so essential to us? Because we cannot live without stories, and the stories we need most are the kind that make exciting the most basic truths of our existence. Melodrama is the thrill of seeing the deepest needs of the human spirit put at fantastic peril.

The launch last Sunday night (here in the U.S.) of Season 4 of PBS’s hugely successful Downton Abbey was pretty good melodrama. In the season three cliffhanger, young Matthew Crawley, scion of the manor family, dies in a car crash immediately after seeing his newborn baby. Season 4 opens with his widow, the hard yet unexpectedly vulnerable Lady Mary Crawley, still absorbed in her grief six months after Matthew’s death. The central plot of the season premiere involves Lady Mary, with the help especially of her brother-in-law Tom Brandon (the former family chauffeur!) struggling to help her come back out into the world. In one of the most powerful scenes of the episode, Lady Mary’s grandmother, the Dowager Countess Violet, played by the redoubtable Dame Maggie Smith, urges her to make the biblical choice between death and life. But it isn’t until Lady Mary is lovingly upbraided by Carson the butler, a man who has known her from her infancy and for whom she has real affection, that she finally finds the courage to venture out into life again. Carson is no deus ex machina; he is the only friend she has with the authority to teach her humility and wisdom.

Which is just the kind of thing that New York Times columnist Maureen Dowd sneers at when she calls Downton Abbey a “subversive fantasy” in which the “servants rule the masters. The bad ones manipulate the lords and ladies into doing their bidding. And the good ones instruct and nag their superiors into making the right moves in their royal lives, both personally and professionally.” The motif of servants ruling their masters is as old as the hills, or at least Plautus, so there is nothing new under the sun there. Dowd’s beef, however, is that the show doesn’t accurately reflect just how miserable the lives of servants in the 19th and early 20th centuries were. Dowd affirms her Times colleague Alessandra Stanley’s opinion that Downton Abbey is a show “about class differences that panders to contemporary notions of democracy and equality.”