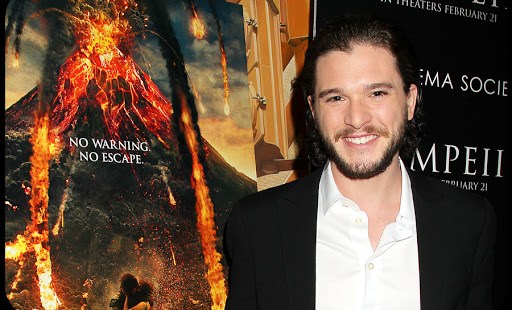 As far as natural disasters go, it’s probably safe to say that the destruction of Pompeii and Herculaneum in 79 A.D. is among the better known. Sadly, this is due in no small part to the large number of lifelike plaster casts made from the spaces once occupied by those who were slain by a combination of 300-degree heat surges and poisonous volcanic gases, and then entombed while still in their various death throes as the lava flow overtook their bodies. An estimated 16,000 people died during those fateful two days when Mount Vesuvius poured rock and ash upon the doomed cities – and we can still see many of them to this day, their macabre likenesses memorializing the suddenness with which death can come upon us all.

With such visceral real life imagery to draw from, it’s no surprise that director Paul W. S. Anderson has chosen to begin his latest motion picture, Pompeii, with slow tracking shots over some of these figures. On top of this somber visual, he superimposes the haunting words of Pliny the Younger, one of the few survivors of Pompeii, describing how he “could hear the shrieks of women, the wailing of infants, and the shouting of men… People bewailed their own fate or that of their relatives, and there were some who prayed for death in their terror of dying. Many besought the aid of the gods, but still more imagined there were no gods left.”

It’s a great moody setup for the film to follow, which Anderson immediately tries to ruin by piling on the clichés. Now stop me if you’ve heard this one before: the movie opens in occupied Britannia a couple of decades before the eruption of Vesuvius, where a young Celt by the name of Milo sees his parents viciously butchered before his eyes by Roman forces. What’s that? You want me to stop already? Come on, not yet… let me go on.

With vengeance in his eyes, the boy manages to escape the fate of the rest of his village, only to be captured and sold into slavery. What? Stop again? No, no, hang in there… let’s keep going. The child is subsequently raised in the gladiatorial pits, becoming an unstoppable killing machine who knows nothing but the bloody arena and the desire to one day find the Roman who ordered the murder of his people. What? Please stop? Okay, fine, I give up. It’s the entire beginning of  John Milius’ Conan the Barbarian, isn’t it? The entire thing.

Of course, as good a shape as he’s in, Kit Harington, who plays Milo the Celt, doesn’t quite fill up the movie screen the same way Arnold Schwarzenegger physically did. To his credit, though, he’s a better actor. Plus, with those curly locks and dark eyes of his, he can brood like a champion, which the ladies seem to enjoy. And that actually turns out to be a helpful trait to possess once the movie leaves Conan territory and begins to dip its toes into the same waters traveled by James Cameron’s Titanic. The comparisons between the two films are inevitable: a looming historical disaster the audience knows is coming, two young star-crossed lovers from disparate social classes trying to survive it, a slimy man of influence who claims the girl as his own and employs a dangerous henchman to see he gets his way. The framework of the two stories are so similar that you almost come to expect an iceberg to shoot out the top of Vesuvius once it finally erupts.

But I’m jumping ahead. The boy and girl have to meet first, after all. That event happens when Milo, having been sold to a Roman dealer in gladiators, is marching in chains on the road to Pompeii and witnesses one of the horses pulling the carriage of the beautiful and wealthy Cassia (Emily Browning) slip in the mud and break its leg. Allowed by Cassia to approach the animal, Milo uses his Celtic horse-whispering powers to calm the beast long enough to snap its neck. Her heart melted by the compassionate way in which Milo dispatches the stallion (must be an ancient Roman thing) and immediately attracted by his brooding demeanor (what did I tell you?), Cassia falls for Milo quicker than you can say “Romeo and Juliet.”

Alas, the pair’s budding romance is doomed from the get-go as Milo is not only a slave, but is also being sent to Pompeii for the express purpose of dying in a fight against Atticus (Adewale Akinnuoye-Agbaje), the undisputed champion of Pompeii’s arena who only needs one more victory to win his freedom under Roman law. While sharing a cell together, Atticus takes an immediate liking to the brooding Milo (I guess that stuff works on gladiators, too), but assures the Celt that he will certainly gut him during the next day’s match in order to secure his liberty. To further impede the would-be lovers, Cassia has drawn the unwanted attention of Corvus (Kiefer Sutherland), a lecherous Roman senator of considerable power who first came to prominence when he oversaw the slaughter of a rebellious tribe of Celts a couple of decades earlier. (If you can’t guess just which tribe of Celts that was, then you’ve probably never watched a movie in your life.) With the power of Rome at his back, Corvus basically demands that Cassia consent to becoming his unwilling bride or watch her parents be executed. It all comes to a head as everyone gathers in the arena on the day Vesuvius unleashes its fury.