Jesus is the True Protagonist of Every Mass, Pope Says At Liturgical Symposium 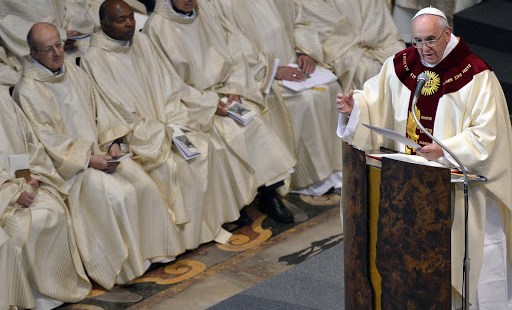 The symposium marked the 50th anniversary of Vatican II’s constitution on the reform of the liturgy, Sacrosanctum Concilium.

"A liturgy detached from spiritual worship would risk becoming empty, declining from its Christian originality to a generic sacred sense, almost magical, and a hollow aestheticism. As an action of Christ, liturgy has an inner impulse to be transformed in the sentiments of Christ, and in this dynamism all reality is transfigured."

Pope Francis’ remarks were given at the conclusion of a symposium to mark the 50th anniversary of the promulgation of the Second Vatican Council’s Sacrosanctum Concilium (SC), also know as the Constitution on the Sacred Liturgy, which called for the reform of the Latin rite.

Promulgated December 4th, 1963, SC was the first document of the Second Vatican Council and was overwhelmingly approved by the Council fathers, 2,147 to 4.

"Sacrosanctum Concilium," Pope Francis said, "[is a cause for] gratitude for the profound and wide-ranging renewal of liturgical life, made possible by the conciliar Magisterium … and at the same time urges relaunched commitment to welcoming and more fully implementing this teaching."

The document "improved our understanding of the liturgy in the light of the divine Revelation, as the exercise of the priestly office of Jesus Christ in which the whole public worship is performed by the mystical body of Jesus Christ, that is, by the head and His members.

"Christ is revealed as the true protagonist of every celebration, and He associates with Himself the Church … His beloved Bride who calls to her Lord, and through Him offers worship to the Eternal Father. This action, which takes place through the power of the Holy Spirit, possesses a profound creative force able to attract every man and, in some way, the whole of Creation."

Francis also quoted Pope Emertius Benedict XVI. "Our daily life… must be inspired, profuse, immersed in the divine reality, it must become action together with God," Benedict said in his Lectio divina to the Pontifical Major Roman Seminary in 2012, and which Francis reiterated. "This does not mean that we must always be thinking of God, but that we must really be penetrated by the reality of God so that our whole life — and not only a few thoughts — may be a liturgy, may be adoration”.

Also in observance of the 50th anniversary of SC, last fall Aleteia published the article "Vatican II vs. the Liturgical Terrorists" by James Likoudis, President Emeritus of Catholics United for the Faith.